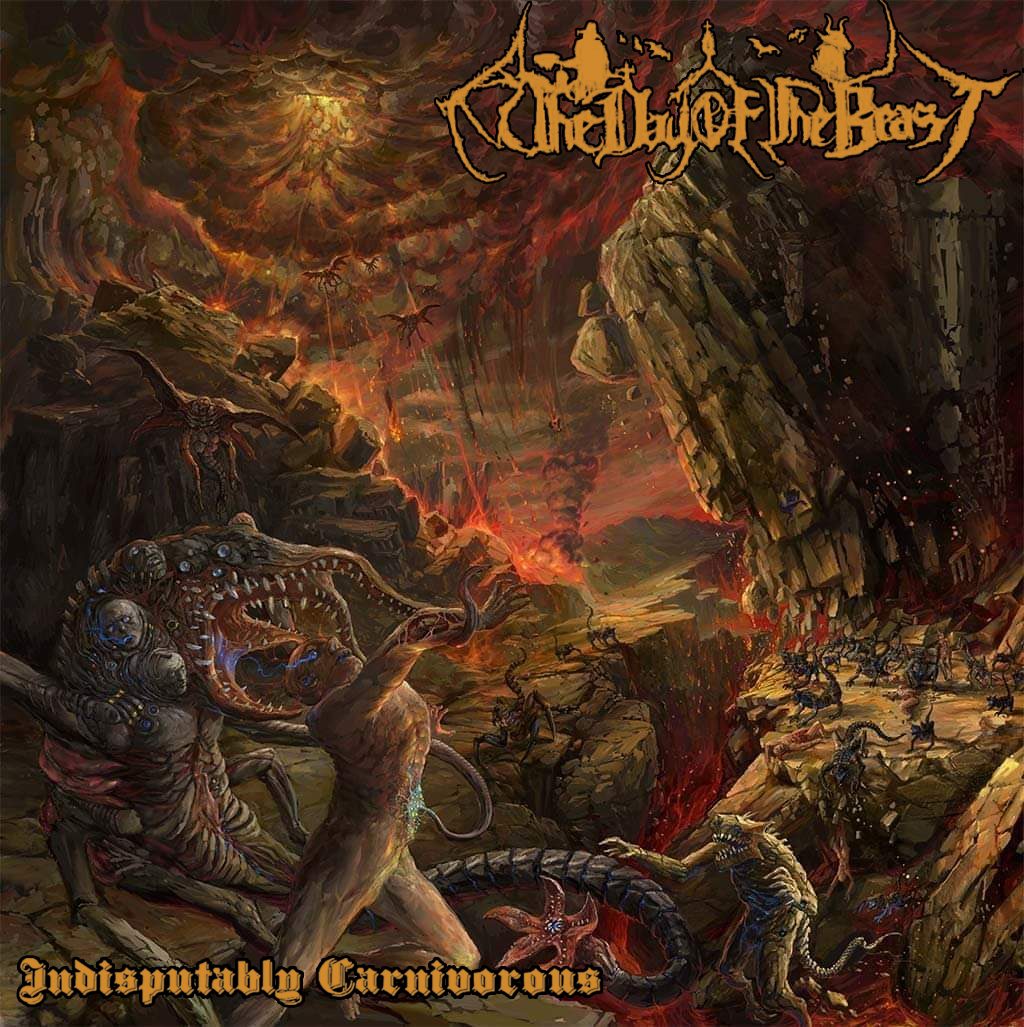 The Day of the Beast  – Indisputably Carnivorous

One of my favorite things in metal is discovering a band with their demo or debut EP then following them as they get signed to a small indie metal label for their first album then produce more albums and finally get their due when they sign to a major metal label. Now times that by ten when it’s a local band that you’ve been following since their start! Long time local veterans in the Hampton Roads area of Virginia, The Day of the Beast, have released their fourth album and landed a contract with Prosthetic Records. If you live in the mid-Atlantic area of the United States or seen them live when they toured with Swashbuckle in 2012, you know what you’re in store for, if not… buckle up buttercup! Now that the band has stepped up to the plate on a major label will Indisputably Carnivorous be their glorious blackened death/thrash album to gain nationally or even international popularity?

Formed back in 2006 in Virginia Beach by life long friends KC Raider, Eric Barlow (guitars) and Aaron Jacka (drums) then rounding out the band with Justin Shaw (bass) and Steve Harris (vocals). Their self-titled debut came out in 2008 on Canonical Hours delivering their brand of blackened thrash metal and received solid praise from the metal scene. The sophomore album Relentless Demonic Intrusion also released by Canonical Hours brought a line-up change as KC and Aaron left with Jeremy Bradley on drums and Mike Gardner on guitar stepping in. In 2017, The Day of the Beast released their third album The Ultimate Cremation Pyre through Horror Pain Gore Death Productions and yet again another line-up change as Steve Redmond (Cyaegha/Foretoken) and Zach Garvin handling the the vacant guitar positions. The Ultimate Cremation Pyre continued their blackened thrash attack but with a stronger emphasis on death metal. Now four years later, Zach has left and long time local shredder Bobby Phippins has stepped in. With a new deal inked with Prosthetic records The Day of the Beast release their fourth album Indisputably Carnivorous! Speaking on the signing, the band says:

“We’ve always had much respect for Prosthetic Records and the impact they’ve had in the world of extreme metal. We’re incredibly honored and proud to be part of the roster!”

Indisputably Carnivorous was recorded from August to October 2020, in Hampton Roads, Virginia with the band overseeing all elements of recording themselves. The album was mixed and mastered by Zach Ohren at Castle Ultimate Studios. The theme of the album was taken from the Graham Masterson novel The Wells of Hell and that’s a good description of what you’re about to hear! “Corruptor/Infestor” starts off the album with a solid blackened thrash and gets your neck warmed up for the head-banging marathon that’s going to happen! Track 2, “Disturbing Roars at Twilight” gets those neck muscles working and delivers a bit more of a death/thrash feel similar to God Dethroned. This song is instantly memorable and might be my favorite track on the album. The title track, “Indisputably Carnivorous” delivers more of a catchy blackened thrash attack and a strong modern Exodus vibe.

“Enter the Witch House” is a catchy mid-paced four+ minute long head-banging endeavor that will test your stamina! Track 5, “Annihilation Prayer” is just straight blistering death/thrash that will pummel in your face similar to Defleshed or The Crown and will easily please any death metal fan! “Venomous Procession” is my least favorite track, not because it’s bad but it’s just the weakest offering on the album. “On Top Many Layers of Horror” kind of follows along the lines of the last song but still keeps you head-banging. Track 8, “Black Forms Materialize” hits you with that galloping thrash type riff and could easily be a classic track to play live. “Judas in Hell be Proud” is definitely a track that shows the evolution of the band creating something really incredible that is instantly memorable! “On Wyverns Wings to Oblivion” rounds out the album and The Day of the Beast doesn’t let up as your neck ends up tense, stressed and worn out from this head-banging opus!

When you finally get your chance to release an album on a major metal label, you definitely want to bring your best material. Some bands swing and strike out while others hit a home run, but The Day of the Beast hits a grand slam! Much like the feel of their debut self-titled album, but taking the next step in the right direction, Indisputably Carnivorous is hands down their best album to date! This album is an onslaught of top-notch blackened death/thrash with the perfect mix of subgenres delivering ripping-fast and catchy head-banging riffs that’s an enjoyable listening from start to finish! An album that is not to be missed and may end up in a few top albums of the year lists. Indisputably Carnivorous is released worldwide through Prosthetic Records on June 18, GO BUY IT!!!