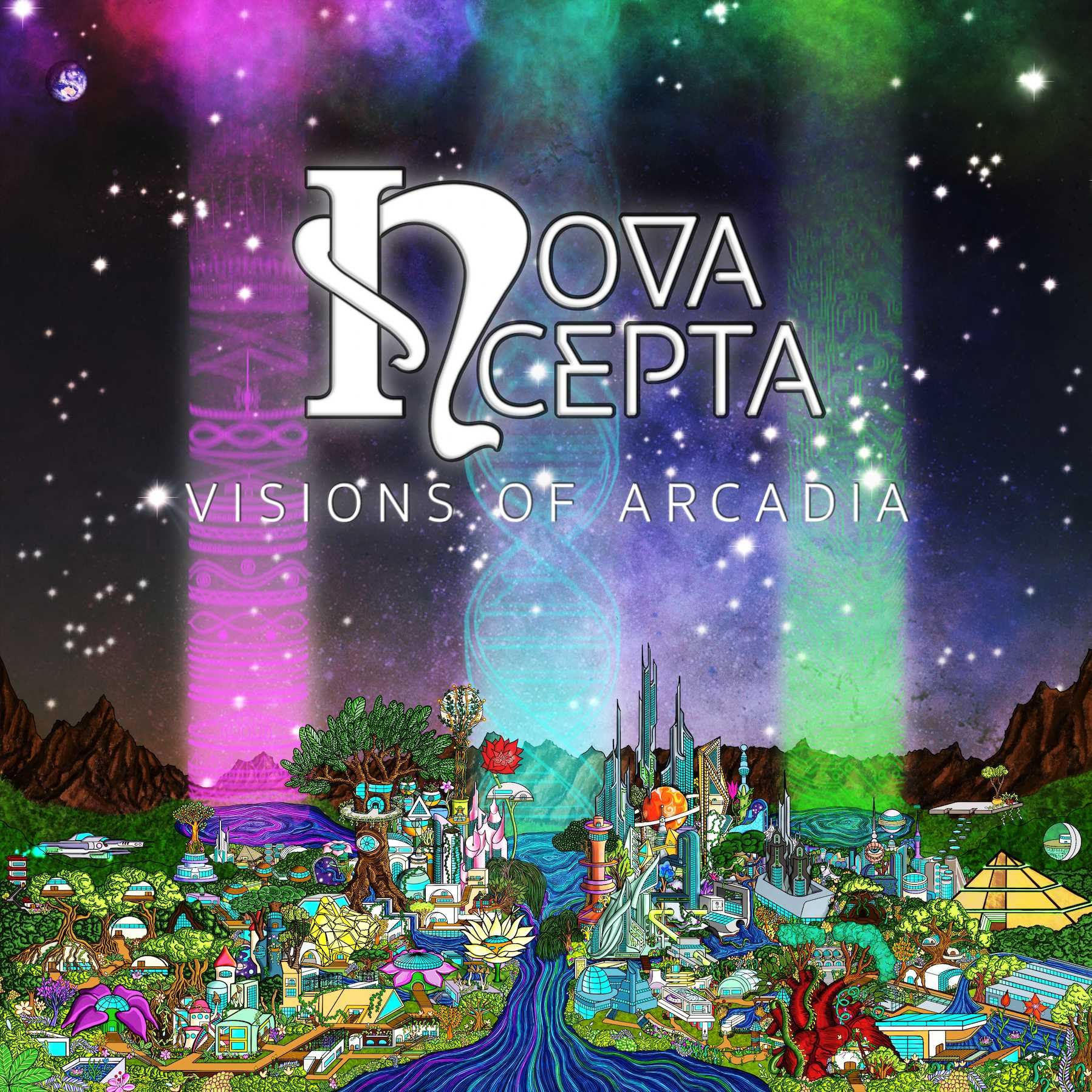 Being a traditional and classic metal fan, progressive metal has always been on the periphery of my listening tastes. I appreciate the talent, but I’m always waiting for the big riff and the hooky chorus. When I got my ears on the latest upcoming album from Sydney, Australia’s nascent cinematic prog metal wunderkind, Nova Incepta, I felt like I would almost be doing them a disservice in attempting to review it. Despite my reservations, I found myself so immersed in this full-length effort that I decided to trying and express my feelings about it, knowing full well I will not do it justice.

Visions of Arcadia is the follow up to the band’s stunning 2016 debut EP, New Initiatives. The band name, Nova Incepta, is Latin for new Initiative. It feels a bit disingenuous to refer to Nova Incepta as a new band. Composer and Producer Daniel Greis has been working on this project for some time. He and guitarist Jesse Turner have been working together for years. Likewise Jesse  worked with drummer Gareth Cohen on their own music (Inabstain series) parallel to that after they both emerged from their previous band Aurox. Greis and Turner both attended the Berklee College of Music while Gareth attended the Australian Institute of Music. The trio reached beyond Australia to find fellow Berklee College alum, Brad Williamson whose bass style fit Nova Incepta perfectly. The quartet have spent the last few years creating Visions of Arcadia, and the final result is a masterpiece of lush atmospheres, dramatic textures, and beautiful soundscapes.

The level of talent in this project is on full display throughout the album’s eight tracks.  The record opener, “Arise” will be released this week. The song creates a rich tapestry of winding movement and emotion. It almost feels like the band is just warming up, stretching out their chops for what’s to come, yet the performance is seamless in its grace and deft execution. I am immediately taken with the fluid fretwork by Turner and the striking foot and stick work of Cohen. Each member truly excels right out the gate.

The entire album is primarily instrumental other than a few soaring female vocal elements and some spoken dialogue to add some depth and breadth. It seems somewhat unfair to name drop, but this album should quite easily resonate with fans of Dream Theater, Transatlantic, and Flying Colors among others. Certainly the likes of John Petrucci, Steve Morse, Neal Morse, Mike Portnoy, and John Myung are clear influences among others. One need only listen to “The Universe” to hear such connections. Williamson in particular channels Myung here, whether intentional or inadvertent. Check out a snippet below:

“Polarity” shifts from a dreamy melancholy to a weighty, propulsive beast. This segues nicely into the theatrical interlude, “A Mind Expedition”. This sets the stage for “A  Glimpse of Clarity,” which reverberates with an opulent yet languorous quality.

Ultimately the journey must conclude, and we are brought to the album’s masterful culmination, “Anonymous Oracle, ” a holdover from the debut EP. Dream Theater’s Jordan Rudess shares his thoughts on the track below.  This is arguably the most grand eloquent and epic track on the record. There is a hypnotizing quality to it, thanks in part to the lilting female vocal embellishments. Despite the sonorous beauty of the track, there is also a somewhat monolithic heaviness as well. The rhythmic complexities are simply mesmerizing. This may be my favorite track…but ask me again tomorrow.

There is so much sonic goodness on Visions of Arcadia, but it doesn’t over stay its welcome. The album length and the diversity spread across these tracks makes for an intoxicating listen. I loved the abundance of creative musical expressions on this record. While progressive rock/metal will never be at the heart of my wheelhouse, bands such as Nova Incepta offer a breathtaking shift from my every day listening and grant me a passport to new worlds I don’t often visit. For fans of the genre, you would be remiss not to give this record due diligence as I’m sure you’ll love what you hear.

I spoke briefly after writing this review with drummer Gareth Cohen about bridging various genres and he shared his thoughts:

“This is really just what we were looking to achieve, a kind of breakdown of ‘genre boundaries’ and a unification of tribes, which fits into a greater socio-political vision that we ultimately have for the bands future, as we look to bring awareness to various philanthropic organizations that are doing extremely important work for the re-rejuvenation of mother earth. The role of the musician has historically been to bring people together and unlock people’s hearts. We intend to do this for the good of humanity, and our music is written as the ‘soundtrack’ for this critical time in human history.”