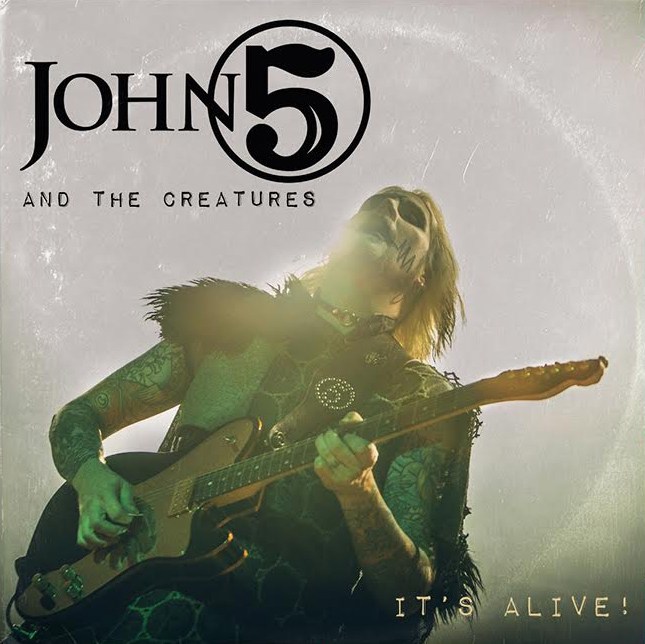 John 5 and The Creatures – It’s Alive!

John 5 has become an icon among modern rock guitarists. His work with Marilyn Manson and Rob Zombie is renowned, and his solo work is inspiring for fans and guitar fanatics alike. In 2017, John 5 delighted the world with another monstrous solo effort, Season of the Witch. He and his band mates, aka The Creatures; bassist Ian Ross and drummer Logan Miles Nix, took the new record on the road. Not surprisingly the album translated in spectacular form to a live setting, and when the opportunity arose, John 5 and the Creatures recorded  It’s Alive!.

To say I am a fan of John 5 is an understatement. He is the main inspiration for my guitar playing. While I know I sound like a child who picked up a cartoon-covered nylon string guitar in the toy store compared to Mr. 5, I still become captivated and motivated every time I listen to him. Every. Single. Time.

Live albums are usually not my cup of tea when it comes to metal. Sometimes I feel it drowns the sounds I have come to love from my favorite metal artists. I was curious to hear how this record was going to sound. Since it is purely instrumental, I was not sure what to expect. As always, John 5 has exceeded my expectations and in addition to the Creatures, it is quite frankly a masterpiece. Bassist Ian Ross and drummer Logan Miles Nix cannot be a better fit for John. It is rare to find a bassist who stands out with incredible talent, especially next to one of the greatest guitarists of all time, in my opinion. I have watched enough John 5 and the Creatures videos to become a Ross fan. He is exciting to watch, extremely talented, and sometimes even will steal the show. Logan Miles Nix sets the perfect beat to songs that I cannot imagine would be easy to play. (I am not a drummer, so I do not know). The frequent changes in the music sound complex, but Nix breezes through it as if he is playing at a high school dance. Flawless.

The album starts with almost a hymn/church-type mixed with an opera show house sound. I chuckled a little at this, then thought, well how accurate, his music has always been a spiritual experience for me. I immediately got lost into it, and even felt myself wanting to tell the audience to “SSSSHHHH!”, like you would in church. It abruptly changes to a, melt your face off, metal riff. In no time you will be banging your head to “Guitars, Tits and Monsters.”. The second song, “Flight of the Vulcan Kelly”, starts of with a thrashy riff that will bring you back to your favorite 80’s thrash sounds. This album continues to blow your mind, song by song (16 in all).

“This is My Rifle” is undeniably one of the best on the album. The heavy riffage that turns into a jazzy solo  and is so appealing to the ear, it will become your repeat-worthy song. Later on, “Black Grass Plague” will have you tapping your shit-kicking steel-toed boots to the chicken pickin’ that John 5 so flawlessly demonstrates. Immediately after is my all-time favorite of John 5’s, “Behind the Nut Love.” originally on my favorite album, Songs for Sanity. He plays this song behind the nut on the guitar head, which gives it a twangy and unique sound. I have tried it, it makes my fingers bleed, but to John 5, it seems as simple as “Smoke on the Water” for new bass players.

Michael Jackson fans, he even has something for you. His remake of “Beat it” is so accurate, you will want to throw on your flashy dance pants and moonwalk your way to the kitchen. The very last song of the album, “Medley”, is an admirable set of many songs you know and love, starting with Van Halen anthems. He shifts from riff to riff you are sure to recognize with a flawless transition. The crowd joins in multiple times on this track singing to their favorite rock songs as the band continues to play. It is easy to pick out this crowd’s favorites.
It’s Alive! is another great add to your John 5 collection. Bringing The Creatures into his performance has proven to enhance the quality of music.

John 5 and the Creatures will be taking It’s Alive on the road this winter/spring for a full tour:

I’m so proud of [the album] that I wanted to put it out and also tour it like bands used to tour live albums back in the 70s. I thought that was so cool! I’ve put out a lot of records, so I thought – goddammit, I’m going to do it! — John 5

Check out the band’s schedule to see if they will be close to you, because I promise you, this is a show you will not want to miss. Vintage record lovers should be pretty excited as well, as It’s Alive will be John 5‘s first album featured on vinyl. Preorder the album HERE. Enjoy It’s Alive!