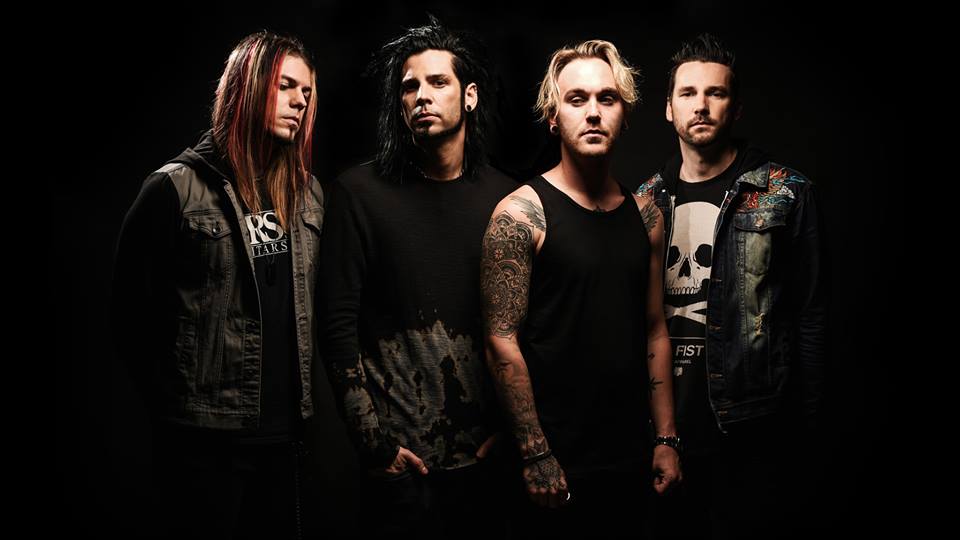 Like a Storm is a band of brothers, quite literally, based out Toronto by way of New Zealand. Matt, Chris, and Kent Brooks started Like a Storm, and  Zach Wood joined shortly after in 2014. They are set apart from most metal bands by Chris’ addition of a digeridoo on many of their songs. Like a Storm prides themselves on the ability to tour and have a fan base to tour for. Their latest album, The Bitterness was produced with performing live in mind. They wanted to produce something their fans could enjoy more live versus hearing it recorded. Metal Nation sat down with bassist Kent Brooks and drummer Zach Wood to talk about The Bitterness.

“The new record we really wrote from the mindset of what it would be like to play live,” said Kent Brooks. “When you’re a band and you write your first record, you’re not really touring so you’re pretty much sitting in your room, writing it. Then you get out there, and you’re like this is cool, but this is kind of slow. Then you start to develop that mindset of what would people throw down live to, or what you could see a crowd bobbing their heads in unison to, or singing back at you.”

The band was able to meet their goal of writing an album that they enjoyed playing live.

“My favorite song used to be ‘Love the Way You Hate Me,’ but now we just started playing ‘The Bitterness,'” said Wood. “That’s a really fun one cause it has your metal core type chunky riffs, but then it has pop punk verses. It has a little bit of every genre in it.”

“’Pure Evil,’ it’s the last song off our new record, we start the set with it, and it just has everything in it,” Kent offered.  “It has heavy riffage, it has cool breakdowns, really cool drumming, singing and screaming, and then it ends with a really fast outro. I’m ready to play anything after that one.”

Like a Storm has been on tour regularly since their new album came out and they are not ready to stop there.

“I don’t think any of the four of us have any thoughts like oh I can’t wait for the touring to be over,” Kent confides. “I think we all just love writing song, recording songs and touring. We just do it for as long as we want to.”

Much like anyone on the road the guys enjoy listening to music as much as playing it.

“We have some really guilty pleasures on long drives of listening to music that other people would probably think is fucking terrible, but we just love it,” Kent admitted. “A lot of Return of the Mech, a lot of 90s EDM Music, and 90s hiphop.”

“When we pull up to a show, we always think like what people must assume we are listening to versus what we are actually listening to. It’s so funny cause it’s just like any one of us will put it on and we are all like oh yeah! Fuck yeah!”

In their tour downtime, the guys enjoy gaming and working on more music ideas.

“I like video games a lot,” Wood said. “I like shooter games, obviously the whole trend right now is Fortnite, I like that. On tour we play a lot of NBA.”

The band gets most of their inspiration on tours whether it comes from touring with other bands or encouraging younger artists.

“I think we also got really inspired musically when we did this tour in Europe with Alter Bridge, Volbeat, and Gojira,” Wood stated. “That was before we really started writing this new record and Gojira really influenced, musically, what we were aiming for. At least for my drumming it did. I looked at that drummer for that band and thought, ‘Wow! I want to be like that guy.’”

“Do music for the right reasons, and make sure you love doing it,” Kent added. “The industry itself can try and push and pull you in certain directions and you gotta be true to yourself. At the end of the day you’re the one playing it up on stage 200 nights out of the year, you’re the one whose name is on the front of the album and other people’s names are on the back of the album. It’s an opportunity to really find your own voice and do something that uniquely expresses yourself. Sometimes young bands can get so caught up in the notion the grass is greener, and I wish we were bigger, but you lose sight of the fact that probably what is going to work best for you is discovering your own sound, and your own way of putting on a show, your own look and your own logo.”

Matt and Chris Brooks both play guitar and sing, and all three brothers always had music in their blood.

“Even before I was in a band I think I was like always coming up with songs and stuff in my head, and I didn’t really realize it at the time,” Kent noted. “I just sorta thought it was something everyone was doing. I sucked at sports so I joined a band. I was like, ‘oh this is all you gotta do.’ It came really quickly. Then as soon as I joined my first band I just knew for better or worse that was gonna to be my path in life wherever it led. I just knew I couldn’t do another job.”

The brothers did not start off in the same band, but eventually realized teaming up would create not only good music from their like-mindedness, but good company. Kent joined Chris’ band and then eventually Matt joined them as well.

“I said to Chris, you know Matt is a really awesome guitarist, singer, songwriter, so I suggested he come into our band,” Kent said.

Zach joined the band in 2014, and has played a key role in Like a Storm.

“At that point, we like okay, let’s focus on seeing how far we can take this,” Kent said. “So we moved up the US. We’ve been family friends with Zach for years, years, and years. He was an alter bridge to the band.”

Being family and long-term friends, has created the success of Like A Storm, as well as some of the songs. The brothers were close growing up, and went on family vacations were all they really had was each other for company.

“We knew one and other before we came into it. I think a lot of bands have tension cause when you’re on a tour bus, you’re living together,” Kent shared. “So basically if you didn’t know one another that well and you join a band, you have to ride in a bus and that’s when you find out if you can live with each other. I think a lot of them find out they can’t.”

“The other thing is that we just seem to have a weird connection, as far as jamming, we know where one and other is going. Same with song writing, I don’t know if that’s like a biological thing or if it’s just more all growing up together and having similar tastes.”

Coming up with the name for a band is not an easy task these days. Like a Storm went through the same process many aspiring bands today do. They spent time Googling names and focusing on unique names. The band name came to Chris while sitting out on their parent’s veranda.

“You have to get pretty creative these days,” said Kent. “Pretty much anything you can think of has been taken. So Chris and I were sitting on the deck at our parent’s house, we were coming up with a bunch of names and then putting them into Google. You could see like 6 bands with that name already. Then there were these storm clouds rolling in, and Chris was like, what about Like a Storm? We were pretty wasted so we were like, well if we wake up the morning and we still think it’s a good idea, then we’ll go with it!”

The band is grateful for the help and kindness they receive in the US.

“Coming from New Zealand, we always appreciate the fact we are not from here at all, and the love the people have shown us we don’t take for granted,” Brooks said. “I could see how if you come from an hour away or maybe two hours away you think it’s just a natural progression, as we spread the word, but when you come from the other side of the world and you come to a town and the place packs out or the station is playing your song, it’s pretty mind-blowing. We really appreciate it.”

“I completely agree with that,”  concurred Wood.

“I love bands that have a history and a legacy,” Brooks said. “Even though this sounds really stupidly overly ambitious, I would love to think that when I look back on it, we have our own legacy across decades.”

Catch Like a Storm on tour this winter, and pick up your copy of The Bitterness.