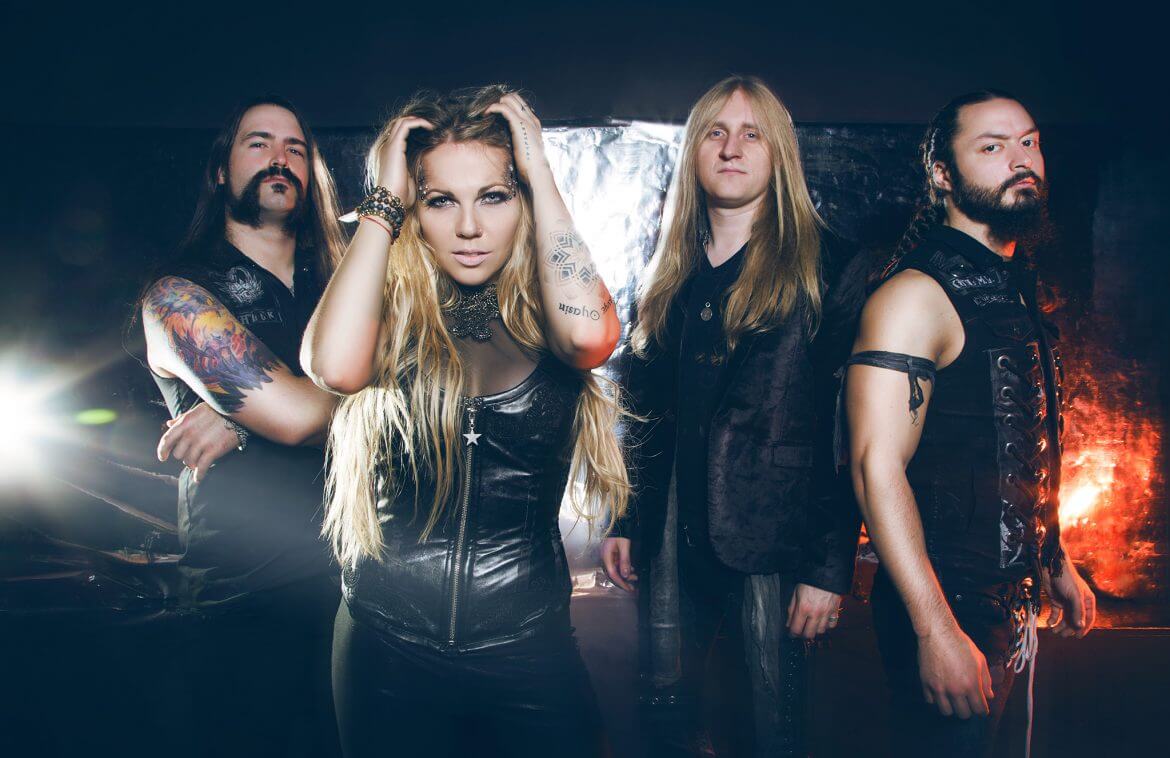 Over the last eight years, Calgary, Alberta vocalist and songwriter Kobra Paige has been working with determined passion to build Kobra and the Lotus, the band she founded in 2009. In 2010, the group released its debut album Out of the Pit. This caught the ear of Kiss bassist Gene Simmons who inked the band to his own Simmons Records for the release of the self-titled Kobra and the Lotus in 2012. The record was produced, mixed, and mastered by Kevin Churko (In This Moment, Five Finger Death Punch), and would be the first to include guitarist Jasio Kulakowski. The following year, Kobra and Jasio welcomed former Unleash the Archers bassist Brad Kennedy to the fold and the trio recorded 2014’s beastly High Priestess album, produced by Johnny K. The record featured crushing tracks like “Willow,” “Warhorse,” and “Soldier.” Each successive release has found the band’s sound growing and evolving, and each new member has complimented and helped form the group’s signature, which revolves around the mighty throat of Kobra Paige. The group recorded Words of the Prophet EP in 2014, a tribute to the Canadian bands that inspired them, featuring songs by Rush, April Wine, and Triumph. In 2015 they dropped the two-track EP, Zombie.

On May 12, Kobra and the Lotus will unleash its most ambitious and impressive record to date, Prevail I, the first of a two-record set recorded in Denmark with Jacob Hansen (Volbeat, Pretty Maids, Doro, Primal Fear). Prevail marks the addition of drummer Marcus Lee, to square off the quartet. This week, Metal Nation caught up with Paige to talk about Prevail I & II and the evolution of the band’s sound, as well as her thoughts on mental health and addiction, plus much more.

Releasing an album in today’s music industry is always a gamble, but putting out a double record, even in two parts is a gamble few bands would dare to take.

“It’s definitely unconventional,” admits Paige. “I really believe that both albums are just as exciting comparatively to each other. By the time Prevail came around, my dad had planted this crazy seed in my head that we should do a double album. I thought, that’s insane. It’s too much material. It’s a career suicide kind of thing. But after thinking about it, I thought, we can do this. I believe in all of us. I believe in the creativity in the band. So we went in, full steam ahead.”

Prevail maintains the signature sound of Kobra and the Lotus, but group made a decision going into making the record to push its sound in new directions.

“The initial concept for the album was when we were in the studio doing the classic rock EP,” shares Kobra. “We were playing all these songs that we loved and grew up with that mostly had been written in the 70s, and I thought, the next album, we should really just get in a space together, isolate ourselves a bit, write a lot and see what happens when we’re in that space with each other and have to organically cultivate some magic.”

This led Kobra and the Lotus to Denmark, to write and work with Jacob Hansen. The entire experience was new for the band, and it was there, under the guidance of Hansen, that they began their evolution.

“We really focused on honing into maybe a more evolved sound that represented some of the things that we value,” confides Paige. “Which for me was really making it known that we are from a newer generation. I don’t want our band to be a direct throwback to the music that we have loved and grown up with and were influenced by. So it was learning to take elements that we love and putting a more fresh impact into it. And I think that’s what Prevail has.”

The experience of creating Prevail in Denmark, had a notable effect on the outcome of the album.

“It was amazing, Kobra offers of recording in Denmark. “We couldn’t have gone to a more obscure place. We were in Ribe, which is the oldest settlement in Denmark. It’s a Viking town, and it’s been completely untouched so all the buildings are tilted and twisting over. There are actual Viking colonies out there that still do mass marriages every year. It was quite wild. I remember the first day we went into the studio and Jacob was there with this Danish songwriter Martin Pagaard Wolff, and they were talking in Danish to each other every time we would say something to him and they wanted to discuss their thoughts around it. First they would talk in Danish, and we were like ‘Oh my God, what is this going to be like?’ (laughs) But it ended up being unbelievable once we got the ball rolling with those guys. It was really challenging because we never stopped creating and that kind of put us in a state of madness I feel like. I know for myself I had a few breakdowns because we weren’t sleeping. We were just focused so hard. But it really created so many new ideas and it was really exciting. It was a massive learning experience.”

You can listen to the entire interview with Kobra below as she talks in-depth about making Prevail, the challenges and themes behind the album, as well as how the band chose which songs to put on each record. She talks about which song kick-started the writing process, and how it evolved, as well as sharing her thoughts on when Prevail II might be released by the label.

This week, Kobra and the Lotus also released the first video from Prevail I for the track “You Don’t Know” which can be viewed below. Bassist Brad Kennedy had this to say of making the video:

“Wherever you are in the world I hope you are having a Good Morning, Good Evening or Good Night. This is the first music video from Kobra and the Lotus’s first of two Prevail albums coming out soon. I wanted to share this with my close friends and family because I have a lot of pride in how this turned out. When we filmed this we had just finished a fairly long hard run on the road. I was physically and mentally drained and just wanted to go home. Music videos are very demanding and the last thing I wanted to do was spend two days slamming my body around relentlessly. But I think all of us reached deep down in our reserves and pulled up everything we had and left it on tape….or digital memory to be precise. I really feel it was captured and it makes me that much more proud in the final product. Thanks for all the support and love from everyone. It has kept me going and the dream alive all these years. Thank you.”

Interview: MINDMAZE vocalist Sarah Teets on the strength of ‘Resolve’