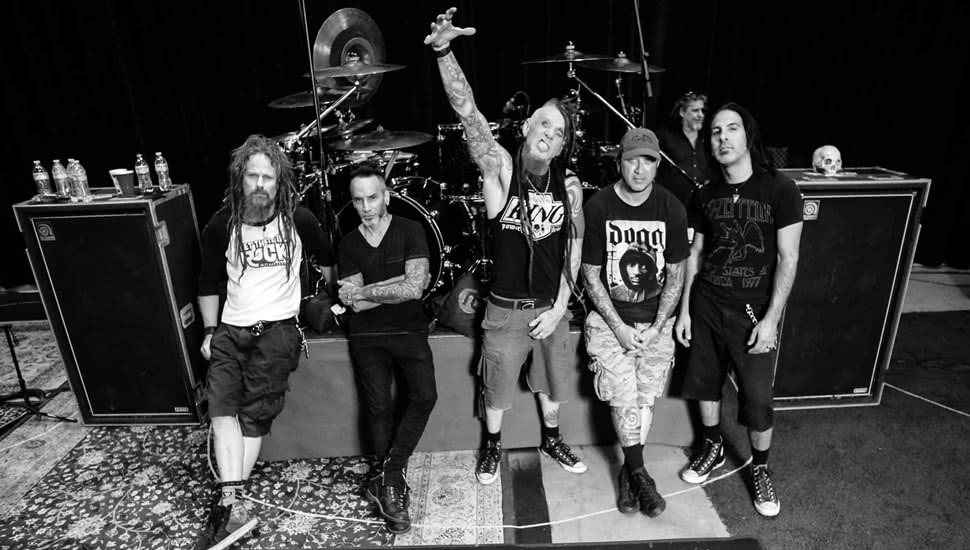 Tragedy can either destroy or forge one’s resolve. In the case of Hellyeah, the latter appears to be the case. Last spring the quintet was stunned by the death of their co-founder, legendary drummer Vinnie Paul Abbott (Pantera, Damageplan). The iconic skinpounder provided the anchor, and no small amount of rock and roll swagger to a band that also includes founding vocalist Chad Gray and guitarist Tom Maxwell, alongside longtime bassist Kyle Sanders and guitarist Christian Brady. Hellyeah has just released it’s sixth full-length studio album, Welcome Home, via Eleven Seven Music, featuring the last to feature Vinnie’s work (get it here). The group will soon return to the road in support of the new album and to remember their fallen comrade. StoneSour drummer Roy Mayorga will continue to sit behind the kit as the Celebration of Life Tour continues next month. Last week, as the band was preparing to launch Welcome Home, Metal Nation caught up with Maxwell to chat about the new record, the tour, Vinnie, and where they go from here.

You recently had to cut some dates from the first leg of the tour due to a hand injury. How is your hand feeling now?

“It’s feeling great. It’s about 90% there as far as flexibility and the surface of it. The palm itself is closed up and healed up. The color is back. I’ve started playing a little bit. My doctor told me the best therapy I can do and rehabilitation  is just play my guitar. Play, play, play. So that’s what I’ve been doing, and I’ll be ready to go by November.. 100%.”

You release the new album, Welcome Home, tomorrow. I cannot fathom everything you guys must have gone through making this record. personally and professionally. I would imagine through  the process of completing the record there was some level of catharsis.

Yeah. You really had to swallow and get yourself out of your own emotions. We were all having a lot of anxiety. Personally, I was having panic attacks. It was just hard. There was so much uncertainty. when we went back in. We knew we had to finish the record, but at the same time, how were we going to continue with this record and get back out there in the grind of the tour and all that stuff.  I think in the long run it really pulled us together. It helped us shake off a lot of the apprehension that we had and break the ice a little bit emotionally. It was good for us to get together and just finish this record. I think that we accomplished it in a way that I know that Vince would be proud of us. And he’d be really proud of the songs. I’m excited for everybody to hear it as a whole piece. That’s the thing about this record, it’s really a journey. It starts off really heavy and it just takes you on this mountainous journey up and down. I’m really excited about it.”

It’s very much Hellyeah, but you can just sense the intensity and emotion reverberating through it.

We took some chances on some songs. We went outside of our comfort zone and tried some things. I mean it wasn’t like we tried it.  It was stuff that we’d longed to do but it never came to fruition. So, on this record, we really wanted to feel a sense of uncertainty with certain things because it’s a little outside our comfort zone. To me that really just shows that we’re growing still. We’re still developing. I think this record is a period at the end of a sentence in some ways, but there’s also hope there. We’ll see what we do in the future. Right now we’re just kind of focusing in on honoring the record, honoring Vince and his memory, his brother Dime as well, and just carrying this torch and support this record as much as we can, and honestly. We’re not really thinking too far ahead after that.”

You can listen to the full interview below as Tom talks more in-depth about Welcome Home, working with producer Kevin Churko, Roy Mayorga, and the Celebration of Life Tour.

Hellyeah will kick off its fall “A Celebration Of Life” U.S. and Canada headlining tour, starting on November 15 in Cincinnati, OH, through December 19 in Phoenix, AZ.

The band will continue to honor their late bandmate by donating a portion of ticket sales from each tour date to the American Heart Association in Vinnie Paul’s memory. Tickets and full routing are available HERE.

In addition to this initiative, Hellyeah will host a TEXT TO DONATE campaign during each of their upcoming tour dates. Fans can TEXT ‘VINNIE’ to #41411, or head to a special CrowdRise page where they can also DONATE to help fight heart disease, as well as read more about the American Heart Association and Hellyeah‘s interview with them HERE.