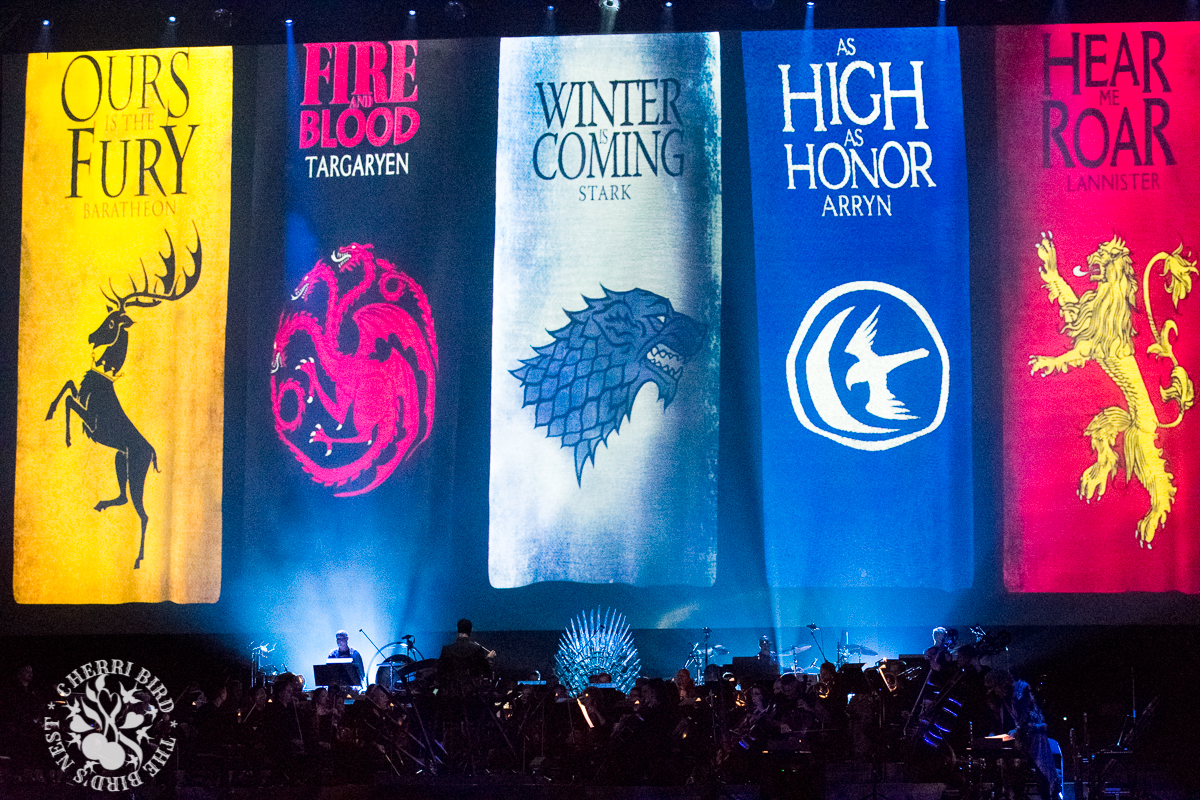 Knowing so many rock fans or metal fans were also huge fans of the HBO series, GAME OF THRONES, I willingly accepted the assignment to cover the show at the AMERICAN AIRLINES CENTER in Dallas last weekend. I am still not sure who will read this review since the music in the series is composed for the actual series, but I figured some sci-fi nerd like myself would enjoy it somewhere in the readership of Metal Nation! I think though, as you read on, you’ll see more of what this show was for me and how the form of art that is music takes a different role as music for a television show, but at the end of the day, it manages to evoke the same things that a band’s record does. I hope you’ll read on and see if you relate.

Before the show and as I got my camera ready in the photographer’s designated area, all I could think of and sometimes blurt out loud to the photographer next to me was “Winter Is Coming” in a low voice, as we waited for the show to start. Being stared at by an enormous eye of a White Walker was a bit intimidating and equally exciting, so to quell the nerves, I stared back at him with my camera lens, as we all anticipated the start of the GAME OF THRONES EXPERIENCE conducted by the composer himself, RAMIN DJAWADI.

How do you bring one of the most watched television show’s music to life in a way that fans will attend? Especially if the show is GAME OF THRONES and the fans are meticulously engaged with every aspect of the show already? My answer to these questions is just like any other way music is conveyed, despite the medium it resides on; you bring the source.

RAMIN DJAWADI is that source or he is the vessel that created the source. As the composer for the music of HBO’S successful 8 Seasoned fantasy series, GAME OF THRONES. But what made going to the GAME OF THRONES EXPERIENCE so fantastic for me is what unfolded in front of me as I listened.

Travelling to cities across the US, German composer, RAMIN DJAWADI gives audiences and fans of GAME OF THRONES a spellbinding experience from the minute the lights dim an the first notes waft from the orchestral movements on stage. The massive LED screen staged behind the musicians becomes a vortex as the music literally sucks you in as flashes of characters from the series appear and fans cheer and hiss at the faces they love and love to hate appear vividly in front of them.

Just like GAME OF THRONES takes human elements of love, life, survival, betrayal, birth, death, war, conflict, resolution, and peace and plops them into an unknown fantasy world, the music of the show animates these elements that writers scribbled on paper, bringing them into life. These elements that exist are not just moved by the vibrations of the strings, the hums of the brass behind the deep throng of the temper, the music allows the characters to become.

RAMIN DJAWADI created an invisible character that appears in every episode and like a spirit possesses a physical body, this character is injected into the very essence of GAME OF THRONES. Where DJAWADI stands apart from other composers, is his talent to visualize the characterizations of not only individual characters, but clans, species, and their traits far beyond their physical introduction. Like a soothsayer’s ability to see the future, DJAWADI does the same for GAME OF THRONES within a few measures of music.

Evidence to that is the GAME OF THRONES EXPERIENCE and those that flock to fill the seats at this show. Fans were taking pictures, there was a buzz in AMERICAN AIRLINES CENTER that was different than a concert. DJAWADI’S composition for the music of GAME OF THRONES is just as relevant as the characters it breathes life into. I don’t think anyone has created music for TV and/or film that reigns as powerful since JOHN WILLIAMS or HANS ZIMMER. Yikes! Those are freaking huge shoes to fill! That’s like saying a newer band and their first, second, or third record is just as or even more relevant to music than the band that has been around for years and has 9 Gold Records.

Throughout the show it became clear to me how critical the music is to something we watch on film or television and how identifying sounds, vibrations, patterns, and pitch infuse with the content and the characters, storyline, and themes. It occurred to me at the show that DJAWADI granted us a peek at how the gods created us in some ways as we watched the music he created for the World and continents Westeros, Essos, and Sothoryos in GAME OF THRONES unfold in front of us. We literally felt the crashes of matter create life in the taiko drums or with the cello breathe a gust of life into The House Of Aaryn or the House of Stark. The birth of characters were pulled from the measures of the violin’s long sustained notes and given a purpose from the cadence of their theme song.

The performance was dimensional, dramatic, exciting, and insightful. For me the show was the swatch needed to complete the entirety, the wholeness of the show. The creation came full circle and became that jolt of energy that gave a dimensional pseudo-reality to something that only resides in the plane where fantasy and mystical stories exist and remain.

The GAME OF THRONES EXPERIENCE is just that, an experience to all the senses, all the emotions that come up and through the show, are blasted aurally and emphasized by what is visually being interpreted when watched at home. The musicianship of the orchestra was brilliant and unmatched. And featured musician’s performances were captivating, like with the song The Red Woman as a violinist was hoisted high in the air as she played under a shower of red glitter and falling leaves. I loved the lighting and the shadows it cast on the orchestra, the soloists and the props on the stage set-up.

The GAME OF THRONES EXPERIENCE is for any level of fan: music or the show and the tour is geniusly created as it opens doors for those that normally would not see an orchestra or a theatrical presentation like this by wooing them with their love of the show (hint, hint wives and girlfriends of manly men that love GOT but wouldn’t be caught dead at the theater, here’s your chance to take them!).

Just be prepared to binge watch Seasons 1 – 7 when you get home because you’ll want to revisit it all before Season 8 starts and because what you just experienced in this show, that connection made with the music at the show, will make watching GAME OF THRONES again a different and deeper experience!

Remaining tour dates and where to purchase tickets: https://www.gameofthronesconcert.com/

Til Next Time – MLMR – Cherri

WE HUNT BUFFALO Premiere New Track For “The Giant’s Causeway”