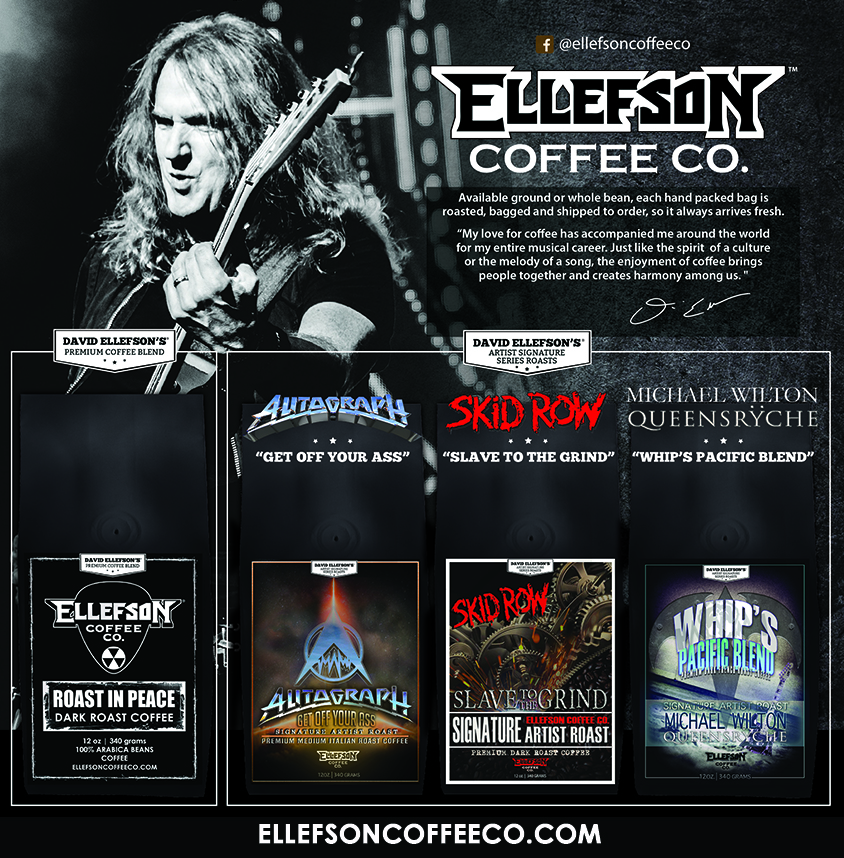 ECC has also announced the launch of a line of artist signature roast coffees, SKID ROW – SLAVE TO THE GRIND, an arabica dark roast, AUTOGRAPH – GET OFF YOUR ASS, a medium Italian roast, and a collaboration with QUEENSRYCHE’S MICHAEL WILTON, who reboots his French Roast WHIP’s PACIFIC BLEND.

As we grow and expand with Ellefson Coffee, I come across more and more of my friends in the business who love coffee as much as I do, and we had the idea to partner up with some of them for the SIGNATURE ARTIST ROASTS. My partner Thom (Hazaert) ran into Michael Wilton at a festival in Minnesota, they chatted about coffee for a bit, Michael had done a line of his own coffees in 2012, and the rest is history. He came home, called me, and we hatched the idea of the SIGNATURE ARTIST ROASTS.

The first three we are launching are all great, legendary artists, and guys I’ve known, and liked, for a long time, and we loved the idea of further entrenching ourselves at the crossroads of Metal and Coffee. We put a lot of time and care into our all of our coffees, and the ARTIST SIGNATURE ROASTS are no exception. Carefully selected premium roasts, chosen by the artists, with killer artwork and packaging.

We all drink a lot of coffee in the band, and it just seemed so perfect when ECC approached us with the idea, and we were like, “well yeah, why not”. And the whole name of it “SLAVE TO THE GRIND”, it was just perfect.

Queensryche guitarist Michael “WHIP” Wilton sheds some light on his history, and love, for coffee:

5 or 6 years ago I had some promotional people that wanted to do a coffee, and we did Whips Pacific Blend. It went well for a while. I’m from Seattle, people in the Northwest are coffee connoisseurs – there’s baristas, roasters, everything up here. And because of the rain everyone up here drinks coffee. And, like Dave, we travel the World, we test different coffees. Not saying I’m a connoisseur, but I know what I like. It’s a French Roast, so it’s not too dark. It’s a good blend.

Autograph loves to get up and get the day going with a great cup of coffee. Whether we’re on tour, in the studio or just taking care of business, it’s what we look forward to.

The moment I wake up coffee is on my mind. Besides giving me the immediate feeling of connecting with nature, it’s truly the first thing I look forward to. “Get Off Your Ass”, the name speaks for itself. It’s the title track of our new album and nothing could make a better statement. 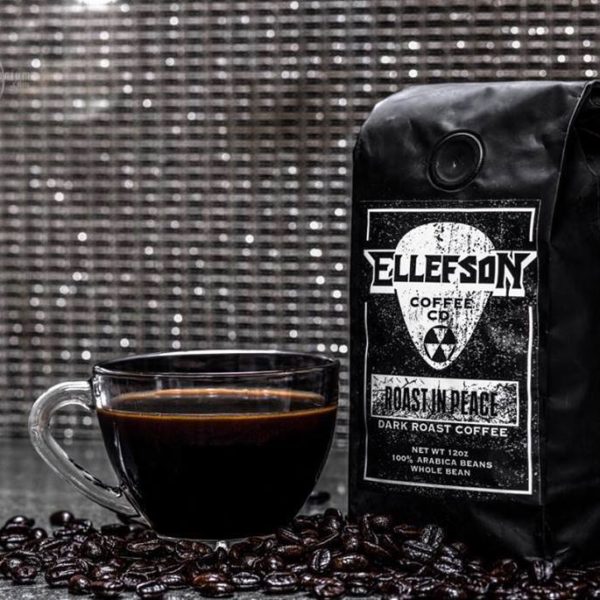 Ellefson Coffee Co launched in 2016, with their original flagship Brazilian blend ROAST IN PEACE, and now boasts a line of offerings including KENYA THRASH, ROCK N’ ROSE, and URBAN LEGEND and is available both online, and at retailers across the US.

The End is Near: SLAYER announce final World Tour with LAMB OF GOD, ANTHRAX, BEHEMOTH, TESTAMENT