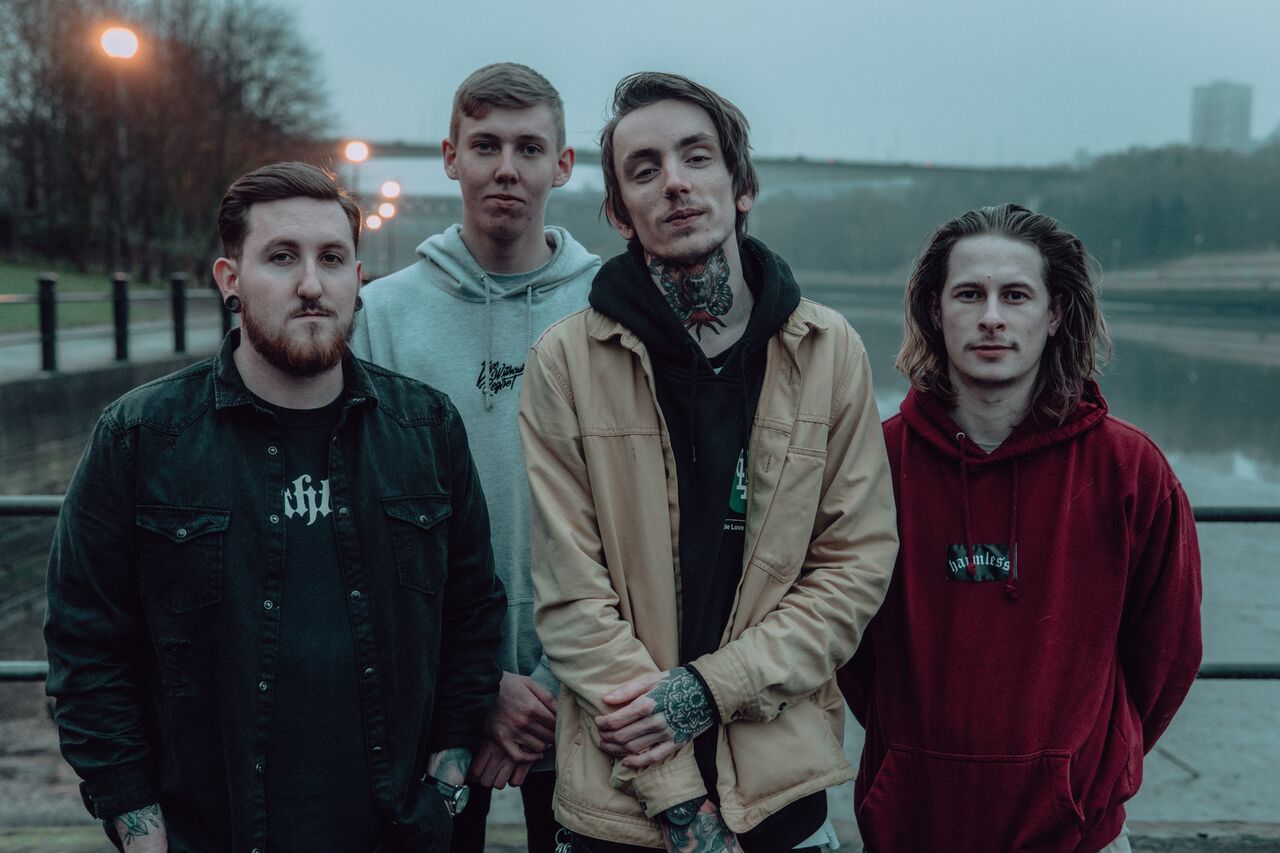 Hailing out of Newcastle, UK, Dayshifter has been bringing some serious metal to the musical table. Consisting of members: Nathan Dillon (vocals), James Taylor (bass), Tom Simpson (guitar), Anth Dickinson (guitar), and Liam Robson (drums), these guys are quickly paving a savage path to this genre. Their debut single, “In Despair” was independently released in early 2017, and the debut EP Hopeful // Regretful, which was produced by Dan Kerr of Avenue Studios, was released on July 28, 2017. After this Dayshifter released a music video for “Of Ghosts”, then signed with Famined Records and released “Serpent Eyes,”, the first single on August 10th, 2018. You won’t want to miss these guys. They are in your face, hardcore, incredible metal, with intense vocal ferocity, heavy breakdowns, and beautiful instrumental work.

You are a melodic hardcore band out of the UK, that began in 2016 correct? Tell me a little bit more about your history.

Dayshifter was originally formed following the end of a previous band that myself, Nathan (vocals), Anth (guitar) and James (bass) were all members of. Despite cutting ties with that project, we were still very passionate about writing and playing music. Dayshifter was the fresh start that we had been searching for. The only member of the band who was not a founding member of Dayshifter is Liam (drums), who joined the band during the summer of 2018.

Who would you say your biggest influences have been?

We draw influences from bands such; Architects, Counterparts, Like Moths to Flames when it comes to our writing style while still adding our own flare into the mix.

You have released an EP and a few singles already, what are your plans in the future? Do you plan to release a full length album soon?

We’re currently in the writing process for a full length album, and plan to have new material out in the spring of next year.

You have recently signed with Famined Records. Tell me about this process and what it has meant for you.

It’s honestly quite surreal for us, like a goal you have in your younger days is finally ticked off. We’re super happy to be working with the ‘Famined guys’ they’ve been super good to us so far and this is just the start of it.

What direction are you hoping to go with Dayshifter? What is your ultimate goal?

All we want is to continue to grow and develop ourselves, to see how far our vision for the band can take us.

What image do you think your music conveys? Is there a certain message you focus on?

I think it portrays a realistic outlook on life; how harsh and unloving the world can truly be but still show that you can make some positive out of the most negative situations.

What song is your favorite to play live and why?

Collectively our favourite song to play live is “Serpent Eye’s” because of how heavy and lively the song is, personally I love playing “Of Ghosts” the most, as this song really gets me hyped.

All of our writing is done at our vocalist’s house, we’ve had the same writing process for a every track we’ve done this far, Nathan (Vocalist) is our primary writer and will work mostly solo on all the writing efforts, once he has a rough idea and stems for a song he’ll share it to everyone else to get some feedback and opinions then refine the song.

Tell me about your gear.

We use a wide range of products and we speak very highly of all the brands and equipment we use. We use equipment from ESP, Fender, Kemper, Line 6, Orange, Gallien Krueger, Zildjian, Shure and Mapex. We are also endorsed by Vocalzone, a great company who make unbelievable throat pastilles designed for vocalists. We use them religiously both in the studio and on tour.

What advice do you have for musicians who are trying to start up?

Never stop working, always look for your next opportunity and surround yourself with like-minded people who will push you not only as an artist but as a person as well.

Are you planning to tour outside of the UK?

We’re currently working on some mainland Europe dates for next year as well as UK dates.

And a fun question, how would you describe your music to a child?

The kind of music your grandparents will scold you for listening too.

Keep an eye on all our socials, thank you for support we’ve received so far. This is only the start of our journey.

Catch us at a show near you soon.

Make sure you keep an eye out for Dayshifter. Their brutal vocals, incredible musicianship, and heavy riffage will having you begging for more.

FRANK MULLEN Interview: SUFFOCATION Founder Chops Off into the Sunset