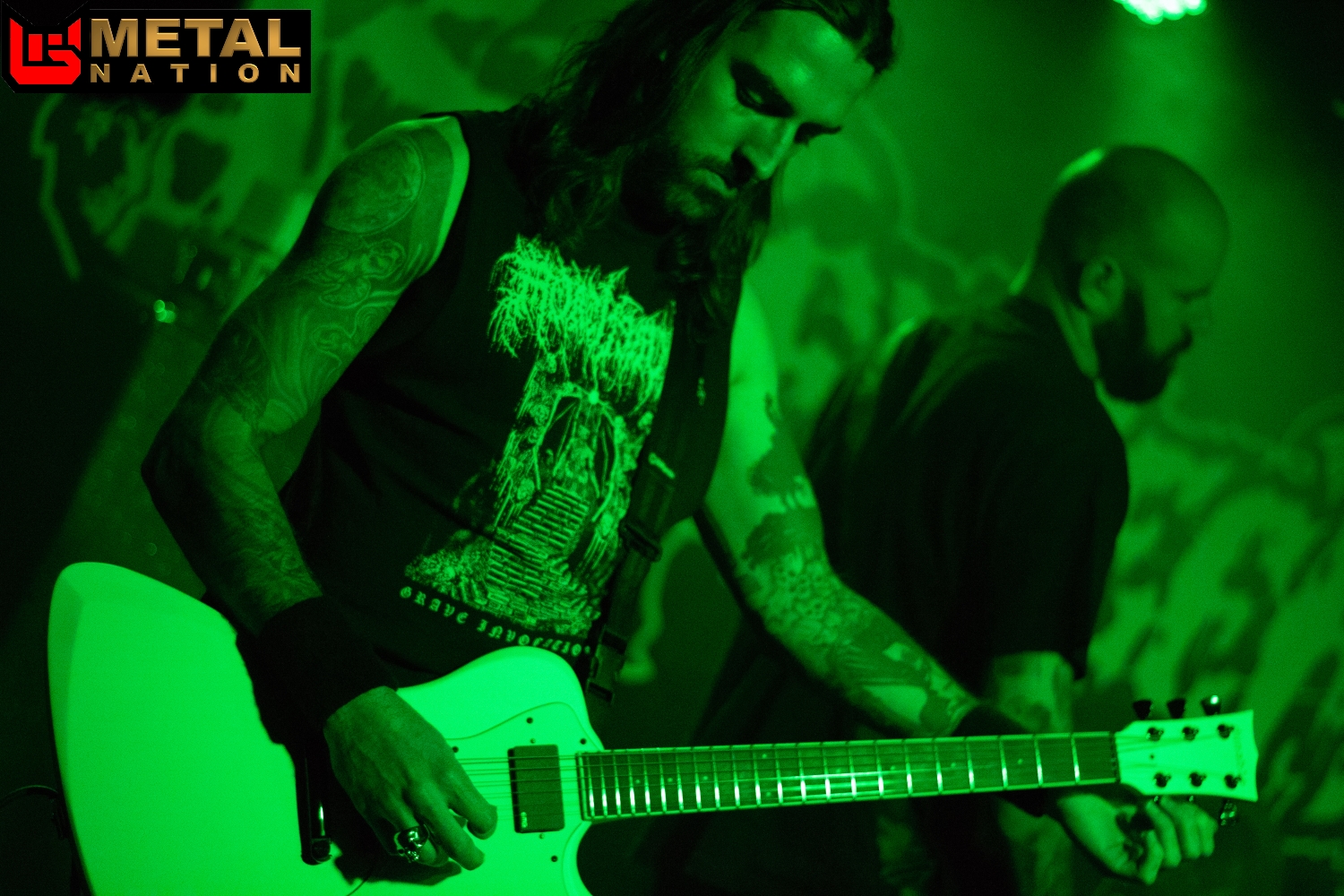 One doesn’t expect much to happen on a Tuesday night, especially at a small venue in downtown KC. Luckily enough, I was immediately proven wrong as this night progressed and very much surprised at the turnout and quality the show pumped out as Full of Hell and Gatecreeper swept into the Riot Room.

Full of Hell and Gatecreeper were names that I became familiar with over the years, hearing sprinkles of their music every now and then when they released new music or were shared by some of my friends on social media. Technically, I went into this show with a blind ear to what music they made, but I knew that I would enjoy what was to come. The tour brought on local bands to support, which I think is something that a lot of tours need to do to show some love to local bands as well.The June 5th event brought us Marasmus, technical death metal, and Aprilmist, atmospheric black metal. The night was stacked with differing sounds and stage presences from the get go.

The first set up was of Aprilmist, the aforementioned band from Lawrence, KS. While they sounded the most different from everyone else, they still fit the bill with their atmosphere and stage presence. Their atmospheric black metal plays more along the lines of the “post” counterpart of the genre, but still using harsh, reverb vocals and black metal riffage. The guitars would take on a soaring quality during choruses and solos, giving the music a slightly lightened characteristic. While it didn’t fit the definition of “trve black metal”, fans of the genre will still appreciate what the group is doing here. They are definitely worth checking out and will be working on some new material pretty soon.

Marasmus took up the stage soon after, presenting a technical death metal onslaught. They were a local band I had witnessed before and always look forward to their sets as they would come charging out of the gate with tons of energy. Marasmus also likes to interact with the crowd, with the vocalist jumping off the stage and into the pit even for a few seconds. This shows how dedicated they are to their craft, making sure that everyone is on the same level as they are, regardless of when and where they are performing. They played a new track from their upcoming album due out on Transcending Obscurity Records. It sounded tremendous and could be the most grandiose track they’ve created yet. I can’t wait to hear what new material they’ve come up with.

Gatecreeper took up the stage, complete with fog machine and an ominous green lighting plan. It remained so for the entire set, giving it a swamp-like setting which matched up with their sound almost perfectly. Gatecreeper plays a death metal that takes on quite a few influences from doom metal as well as some black metal sprinkled in. Their vocalist moved around quite a bit with the mic stand and even looked like he was part of a ritual during some of the songs. Each riff reverberated throughout the whole venue, full of dread and concussive force. While I’m always down for some fast-paced, eviscerating death metal, Gatecreeper’s style will always hit the mark for me. The oppressive atmosphere on top of their sound brings about one of the best death metal shows I’ve seen in awhile. This oppression continues to the last act of the night, Full of Hell.

Full of Hell made use of red lights during their whole set, immediately encapsulating the crowd. Dylan Walker walked up to a wired contraption of sorts, and slowly twisted knobs and threw some switches, which began to play sampled audio from programs and other various noises. The set truly began when the band began to pick up momentum and blew up the entire venue with noise, riffs, and a whole lot of yelling. Each song of the set would span may a couple of minutes at most, filled with high octane death metal and experimental noise. The crowd dispersed slightly, but that didn’t keep the energy from waning. I managed to get to the side of the stage for a lot of the set and the front row was constantly being shoved into the stage. The set didn’t seem to last too long, but it was much more memorable than other shows I’ve been to. It reminded me heavily of Revenge’s set when I witnessed their act a couple years ago. Loud, fast, heavy, and mind-blowing.

While many moments were short and sweet and even close to terrifying, it was an amazing experience. Tours like these always go unappreciated due to the popularity of some of the projects involved. While small, it packed more of a punch than big time venue and festival shows, which is saying something considering the size of those alone. I can’t wait to see what other tour packages these bands find themselves on and hoping they bring the same energy and atmosphere. Don’t take these bands lightly, as they won’t be doing the same for you when they come to your town. They’ll downright destroy you.