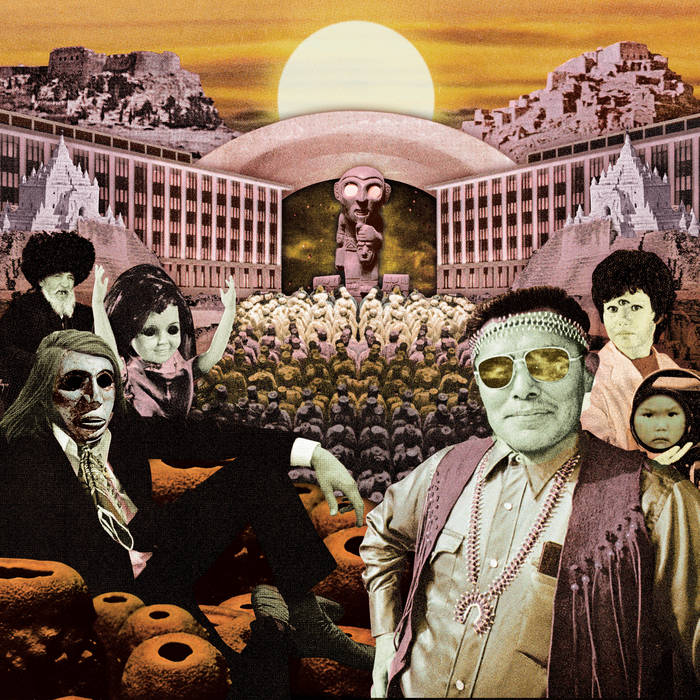 Every once in a while you find a unique masterpiece that takes you by surprise. An album you know is going to quickly become a favorite. Last year, that album for me was self-titled debut by Pale Divine. This year, third month in, and I have found one already, Supermansion‘s Solar Order . The album has been an absolute treasure all the way through. It had my attention from the beginning, and easily kept my interest throughout. Incredibly diverse and uniquely composed, it took me on a crazy and wild ride as I craved more and more. Those who know me well will not be surprised that Mr. Bungle, one of my favorite bands, is credited as an influence for Supermansion. Other influences are Black Sabbath, Clutch, Ween, Queens of the Stone Age, Helmet, Blonde Redhead, and The Melvins. If this alone doesn’t sell you on this album, then may Lemmy have mercy on your lack of musical taste. All joking aside, this album is a treat for any music lover, although especially the stoner rock fans. I am extremely thankful to be the “chosen one” to review this album, because, as you all know by now, I refuse to review albums I don’t enjoy. Thankfully Metal Nation gives me that ability to have that say, as I have turned away many. Not Supermansion. I knew I wanted to review it within minutes.

Let me tell you a bit about the guys behind the magic. Based out of Windsor, Ontario, Supermansion joined forces in 2003. Band members; Denis Zonta (vocals), Geoff Zanetti (vocals), Dave Houle (guitar), Joel Bishop (bass), and Jamie Fry (drums), have just released their latest self-produced album, Solar Order, which is 10 tracks in all. While this is their 5th album, they state they are especially proud of this one. Proud they should be, because it is a captivating album.

Diving right in, “Theme From Solar Order”, so cleverly titled might I add, starts with a melody and tune you would absolutely expect from a theme song. I automatically felt like I was watching a TV series straight out of the 60’s. This super short introduction leads you to believe you will be listening to a Vanilla Fudge psychedelic rock type trip, but a little over a minute and a half later, you are quickly jolted into a stoner rock dimension of epic proportions. “Hole in the Universe,” is my new anthem. Definitely my favorite of this album, which was not easy to narrow down. How do I put this song into words? It is not easy, because I keep trying when I listen to it, but immediately become transfixed on the feel and the composition. It is extremely catchy, but not in the way “catchy” is usually used or explained. The guitar riff is heavy, the guitar solo is flawless, the vocals are everything I want in a stoner rock sound. This song alone I could write a whole review on it, it is just that good. Let’s just say, it puts the groove in groovy.

“Heartbreaker”, is clearly a Clutch influenced song in a beautiful way. The guitar riff is the first indication, with the vocals a near second. Listen when the word “heart” rings out, they do a really uncommon sound that is particularly rare. A female vocalist is incorporated in this song, briefly here and there, but wonderfully fitting. “Where Angels Dare to Tread”, has one of my favorite riffs of the album. There is also some epic solo work throughout this track. As soon as it starts to slow down, about three-fourths of the way through, the bass introduces the next solo which hits your soul with incredibly sublime force.

“Head and a Tail”, I have nicknamed the worm metaphor song. Here is one of the many things I love about this album, the lyrics are profound, yet diverse enough that everyone can develop their own interpretation of them. Listen to the lyrics and let me know how you interpret them. “Secret Spider”, oh how I love this song. This is about a metaphorical spider I have nicknamed Horis the spider, Boris’s friendlier brother. “Life is a web of distraction we make, then get tangled inside”. Again, profound, but may be interpreted differently per person. This song is much more mellow and slower than all the others, but don’t let that deter you, it is an alluring song. Might be my second favorite, but there is another contender that comes up later in the album.

“Manvil”, two words, aggressive and perfect. “Hammer of London”, where do I begin? This song starts to take on more of an experimental and psychedelic rock sound. They incorporate some interesting video game sounds and it ends where you almost feel like you are being laser-beamed to the mothership. It is divine, it is fascinating, it is alien-like.

The album’s title track is perhaps my second favorite number on Solar Order. This song is a journey all in itself. Another psychedelic rock atmosphere in which the guitar solo takes a different tone to fit the song perfectly. There is a voice that appears out of nowhere. I will be honest, I was out walking and listening to this album to gain insight, and literally looked around when that voice popped in. It sounds like it is coming from the depths of someone’s soul, or perhaps a long lost soul itself. The harmonizing is interesting and exquisite. As you listen to him sing out “praying that the sun doesn’t rise,” the song shifts and sounds like that has just happened, much to his dismay. The sun has risen, and the bass takes over to introduce this event. I love when bands give the bass a voice and gives the musician an opportunity to have stand alone prominence. This song ends with a bit of a Doors vibe.

“White Sun (Dead Man Rhythm)” is the last song on the album. It picks back up into the stoner rock groove and is a steady ending to a flawless album.

Not too often does an record render me speechless, but retro-cinematic groove of Solar Order has accomplished that feat. It is divergent, prodigious, and unblemished. The fact that these guys are self-producing these albums is nothing short of amazing. An enjoyable add for any music lovers, because it is that impeccable. Listen and lose yourself in the music and lyrics. It is an absolute must buy and support. If you are one of the lucky Canadians who lives in or near Windsor, Ontario, make sure you make it to Supermansion’s Album Release Extravaganza on April 12th, 2019 at The Back Stage.

KYLE SHUTT Interview: ‘I Never Have A Plan B’