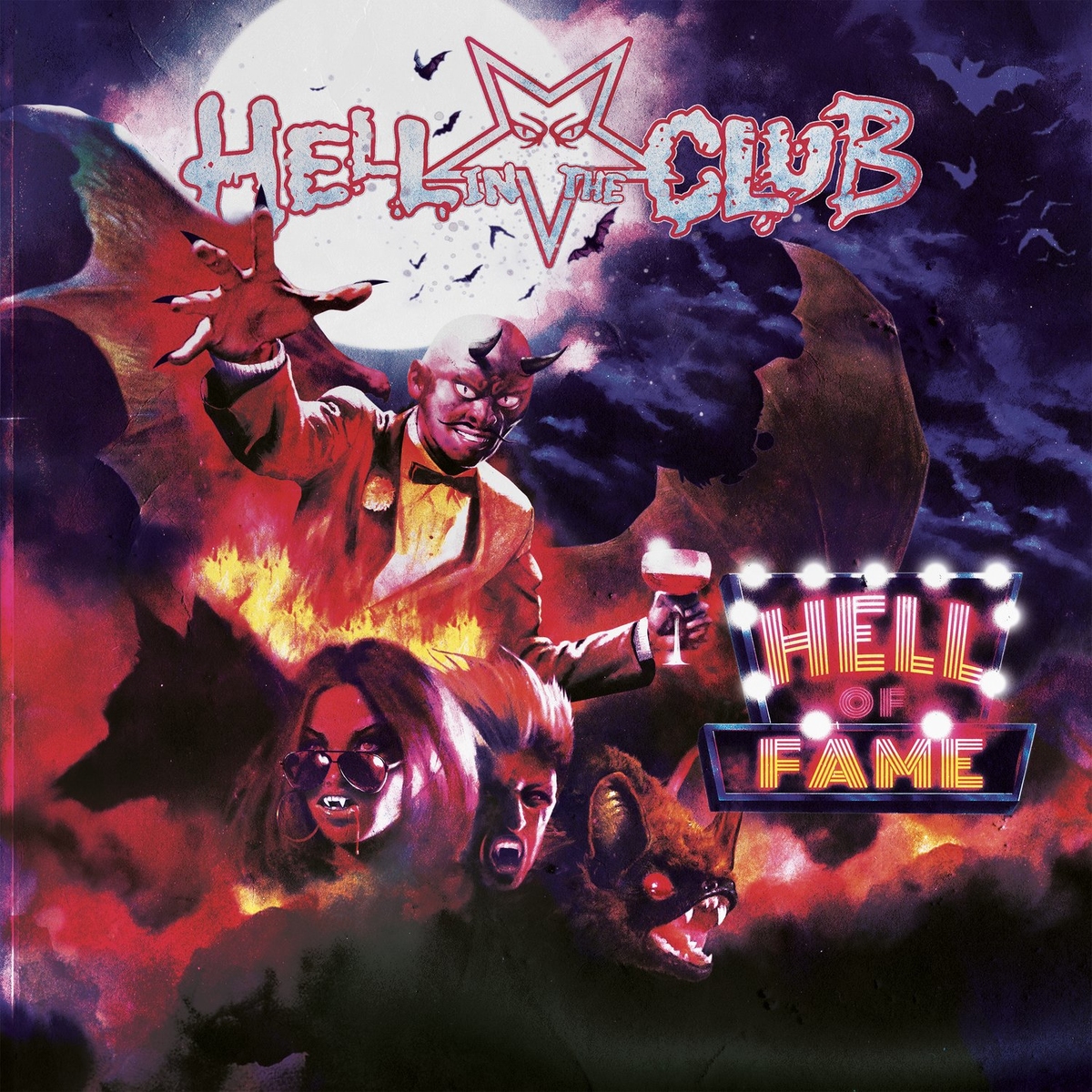 HELL IN THE CLUB – Hell of Fame

I have a soft spot in my hard rock heart for 80s hair metal. There is just something about the carefree energy of big hooks and unapologetic cheese that speaks to me. Maybe I need a 12-step group to address this, but I’m happy to indulge without shame. Italy’s Hell in the Club are a band that have managed to recapture that era of music without the Aquanet and Spandex. This summer they returned with their fifth full-length studio album, Hell of Fame, but will it hold up against their past efforts?

Admittedly, I did not stumble across Hell in  the Club until their 2017 release, See You on the Dark Side, but I was immediately intrigued. Sonically, they remind me of my favorite glam metal alums, Danger Danger, with a modern flair akin to Sweden’s Eclipse. Vocalist Davide “Damna” Moras, who also fronts folk power metallers, Elvenking, sounds a bit like a cross between Ted Poley and Erik Martensson. He is joined by Andrea “Picco” Piccardi, bassist Andrea “Andy” Burrato (Eternal Idol, Secret Sphere), and new drummer Marco Lazzarini (Archon Angel, Secret Sphere). With the exception of Lazzarini, the band has been together for over a decade, releasing their debut album Let the Games Begin in 2011, followed by Devil on My Shoulder in 2014, and Shadow of the Monster in 2016.

Compared to the band’s past efforts, Hell of Fame is a less bombastic affair. It is more straight forward with less bells and whistles, but it still seems to work for they guys. The album opens with “We’ll Never Leave the Castle” which kicks off with a bit of melodic acoustic guitar before turning into an addictive ear candy hair banger. This one definitely hits the Danger Danger groove for my ear. Big harmonies on the chorus, thumping bass, and a short but sweet solo.

“Worst Case Scenario” is a bit heavier and serves up a big dose of gang vocals. Certainly not as engaging as the first track, but still hooky and enjoyable. A good 80’s style anthem. “Here Today, Gone Tomorrow” is still very much sleaze metal, but with more bite in the Motley Crue vein, at least until the big European chorus which oddly enough weakens the song overall.

The band come back with the mid-tempo groove of “Joker”. Burrato’s bass owns this song, but ultimately it’s rather tame and not overly memorable. Some of the album’s early swagger returns on “Last of an Undying Kind”. Great gang chorus on this one. This is followed by another 80s style anthem in “Nostalgia,” that actually dips more into new wave elements copping from Peter Schilling‘s “Major Tom (Coming Home)”. This space-themed homage even bleeds over into the video. Perhaps not overly original, but certainly an enjoyable romp.

You can’t have a hair metal album without the requisite power ballad and Hell in the Club do not miss the cliche, delivering  a good one with “Lullaby for an Angel”. “Mr. Grouch” hits with a bit of a retro Dokken/Skid Row vibe. “No Room in Hell” has a darker more gritty feel akin to Crue’s “Dr. Feelgood” and Burrato gets his snakelike bass rumble pulsing like a menacing predator. “Tokyo Lights” brings us back to that big hair, bigger hooks, AOR magic that is purely infectious. They close it all out with “Lucifer’s Magic” which is the darkest and heaviest track on the record, though still quite melodic.

In all, Hell in the Club have crafted another highly enjoyable, addictively vintage sleaze rock record with Hell of Fame. It’s packed with tons of hooks, big riffing, throbbing bass, and massive vocals. As always they have channeled a fun loving party spirit, and while they are not breaking down any creative barriers, they know how to have a good time and do so in shameless fashion. Sometimes you just need to unplug your brain, throw back your hair (if you still have it), and get into some raunchy no frills rock and roll, and that’s what Hell in the Club deliver.