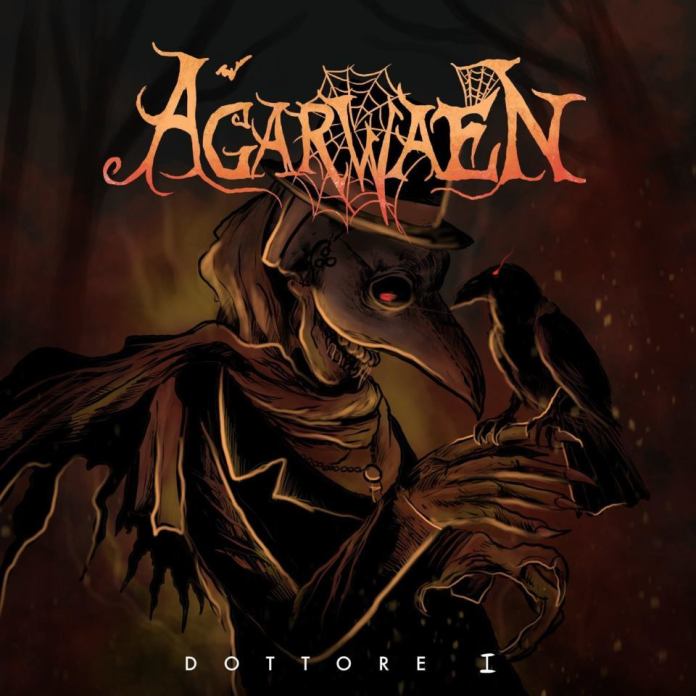 If musicality bends the listener’s ear, sincerity is what makes the bond. Agarwaen’s sophomore effort, Dottore I, surely offers both. Independently released on December 6th, Dottore I spans some 50 minutes over eight tracks. The record is a straight-forward representation of melodic metal refusing to fit a single mold.

”We definitely are not defined by a single genre…I’ve already lost hope of that…You can hear elements of thrash, power, dark, black, death, doom, progressive, symphonic metal. And that’s just me…Then Mika and the guys give their own spice to the music.” –Pauli ”Vryko” Hodju

Melodies abound in such a way that is neither pretentious nor overthought. They range from well-placed symphonic samples to complex guitars, and keep a hold of your throat throughout the duration of the record. Live drums are relentless and offer all the discerning metal rhythmist could ever ask for. Recording and mix are also very clean in Dottore I – a must from an independent release.

Pauli states on his influences:

“…If I had to choose one or two then I must say King Diamond & Cradle of Filth. I’ve always loved the horror stories behind King’s albums and whole spooky mental story telling. CoF has this really dark, brutal and yet melodic vampiric aspect (Vrykolakas means Vampire in Balkan mythology). But probably the biggest riff gods for me are Mille Petrozza, Jon Schaffer, and James Hetfield!”

And while it’s true that an artist will often pay homage to their influencers in sound, Agarwaen still manages to brand their craft uniquely. Opening track, “The Path Beyond the Existence,” captures all the listener needs to understand about Dottore I while still piquing interest enough to continue listening. “Misantrophy” and “Amuku Be” are another couple of must-hear pieces.

A decade has lapsed since their debut, Vrykolakas, but Pauli assures conditions had to be perfect at all cost;

“…it was really hard to find proper musicians who would believe in this….until I contacted Mika Lumijärvi. He found all the right guys! It’s been crazy, I didn’t even know who was going to sing on my album until it was recorded. That’s how blind my trust was towards Mika!! I had more time to finish Dottore while others were recording it and I had to learn how to write lyrics.”

Worth the wait, and mentioning that with the band’s current momentum and chemistry, Dottore II is also halfway composed.

As a new fan, and admirer of Pauli’s passion as an artist, Dottore I is a recommended listen. As per protocol, sample Agarwaen through the usual means, and then consider supporting the artist through the purchase of their work and merchandise.