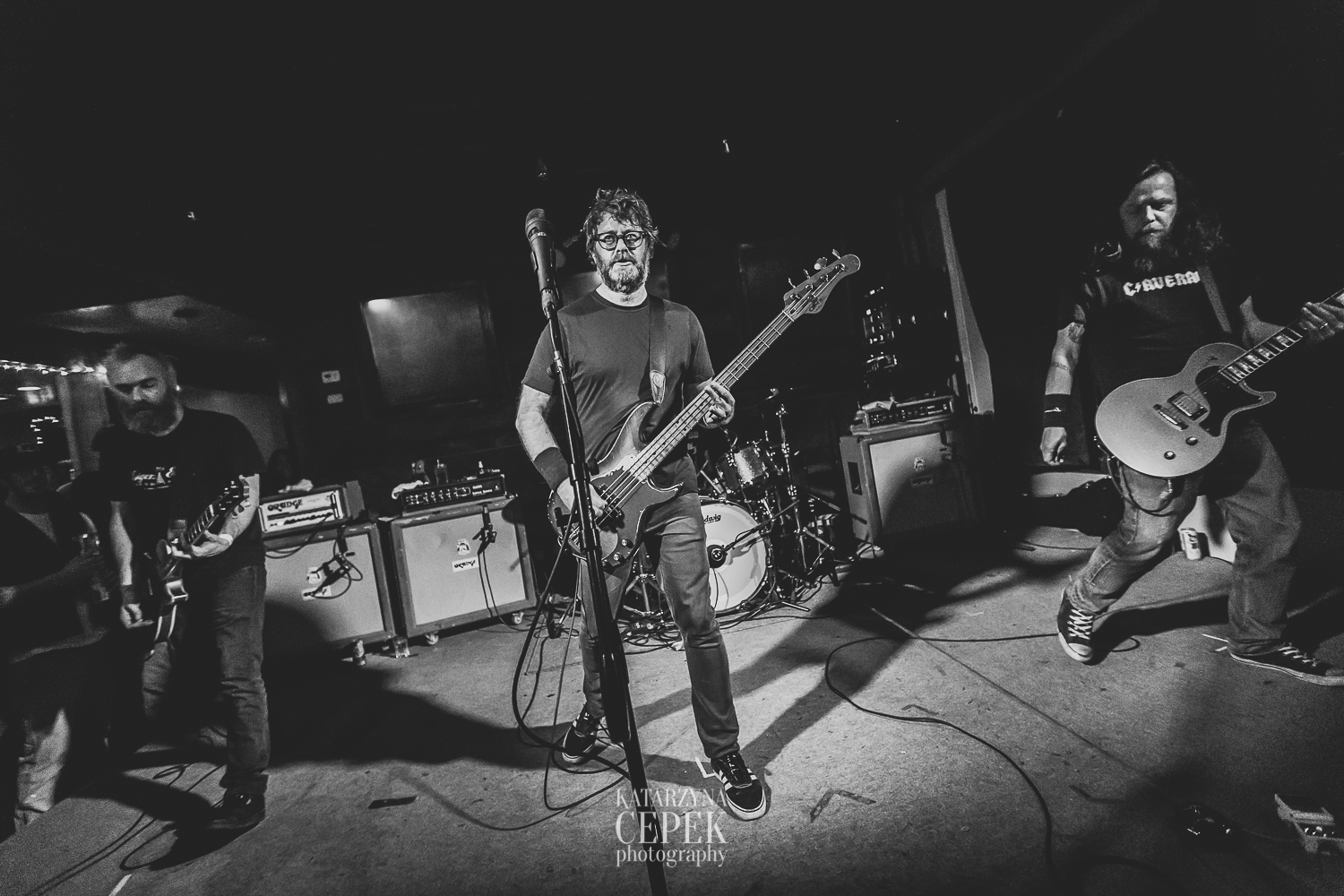 I was nervous about writing this concert review due to the crowd who created a less than perfect environment for a show that was sure to be outstanding. When the main band has to literally stop playing and practically hop off stage to stop a fight, it is embarrassing. Between beer being spit on the musicians and all their equipment, people thinking jumping on stage or getting right in the musicians faces while practically pulling on their cables is warranted or appropriate, you almost have to stop and look around to make sure these are actual adults. It was a less than favorable crowd.  Here is the awe-inspiring thing I learned from it, Red Fang, Telekinetic Yeti, and Ghostbox put on a killer show at Boise’s Olympic Venue Sunday night, despite the crowd. They all brought metric ton of energy and incredible stoner rock dominance. At one point I wondered if the floor might collapse due to all the bodies crammed in the upstairs of the small venue. Thankfully the floor survived, the fans got rocked, and the bands wrecked it hard all night long . I did not get to experience the show like most shows (thanks to the aforementioned social misfits), but the three bands that played that night were undeniably perfection. This says a lot about these hard working acts..

The first band that played was local outfit, Ghostbox. Everyone I know who has seen Ghostbox has nothing but high praise to offer. They are incredibly talented and all around good guys. Members Jason Whitley, (guitar and vocals), Steve Bade (bass), Curtis Dela Cruz (guitar), and Ryan Anderson (drums), have become a Boise powerhouse. In my opinion, they have been the highest evolving local band. Every time I see them, I am more and more impressed. Their setlist this night was a little less traditional for them, but they killed it flawlessly. They brought the stoner rock vibe, tying the musical night together with a beautiful stoner rock bow. Whitley’s vocals were impeccable, as they always are. Bade’s stage presence is always an incredible thing to witness, and he is difficult to look away from. Dela Cruz floored me with his insane guitar riffs and lead licks, and Anderson brought it perfectly together with his timely drum beats and aggressive style. They started the night off playing a personal favorite of mine, “The Sun and the Snow”. This bold and energetic song set a nice pace for the night to come. It was high energy, head banging, groove metal, perfection. They went through their songs, quicker than what I hoped for. With Ghostbox, every setlist is too short, you just never want it to end. They ended their set with “Me and You”, which is an extremely entertaining song. You need to listen to it to understand what I mean (see what I did there, now go do it!) The crowd clearly enjoyed them, because they quickly filled the floor up before they finished the second song of their set.

Telekinetic Yeti was something I was not quite ready for, in the best way possible. I have their album, I love it, and I have listened to it many times. I had no idea there were only two members of this band, which completely floored me. Alex Baumann (vocals and guitar) and Anthony Dreyer (drums) are the members out of Iowa, but Dreyer was not there, so fill  in drummer Matt Ajishegiri, was rocking the drums. It is difficult to explain these unbelievable musicians. Just listen to one song, and keep in mind this is two musicians creating this music and you will somewhat understand. Watching them was nothing like I have ever seen. So much energy, so much excellence, I was transcended right into the music. For a moment I was able to forget about the crowd, and really experience this band on a whole new level. The whole rowdy crowd seemed transfixed. It was an unexplainable encounter. I enjoyed them thoroughly before, but they made me a huge and forever fan last night. Baumann on guitar constructed a sound that was fuzzy, heavy, and exploded with so much life. Ajishegiri was a beast behind the kit I could not look away from him. Their whole set was phenomenal from beginning to end.

Red Fang never disappoints, and this night was no exception. They are a ridiculously talented, hilarious, group of musicians out of Portland, Oregon; Bryan Giles (guitar/vocals), Aaron Beam (bass/vocals), David Sullivan (guitar) and John Sherman (drums). I am going to say a quick thing about the crowd, because it is a testimony to how incredible these guys are as humans in general. This is an extension of my opening rant. Many in the crowd were disrespectful in many ways, from spitting beer on the band and all over their equipment, to slamming up on stage like they were a part of the band, to going up on stage to crowd surf (which was not encouraged by the band), to getting right in their faces and about pulling out their instrument cables. There was even a fight that the band, yes the band, had to try and break up. Here is the thing, they stopped, broke it up, waited patiently for security to take care of the problem, stated this is not how we do things, then just made jokes about chapstick until the problem was taken care of. They did not get upset, they were extremely light-hearted about it all. Then they continued playing and rocking all our faces off as if nothing happened. I was extremely impressed with how they maneuvered around it all and still put on one of the best performances. This was my third time seeing them, and every time is exceptional. While I was quick to anger, I did not want to even budge away from their performance, which goes to show you how dynamic they are to watch and listen to. Right after the interruption, they played three of my favorite songs, back to back, “Cut it Short”, which I found hilariously ironic, “Sharks” (probably my personal favorite), and “Prehistoric Dog”, which is a fan favorite. The whole set was remarkable. Their stage presence and energy is unique. I will always make sure I catch Red Fang when they come into town, hopefully they are forgiving enough to come back to Boise.

This night was strange but impressive, for many reasons. One fan, John Staffer, stated “all the bands were awesome. Especially the opener. Red Fang was absolutely amazing. One of my favorite bands. Very tight show.” Our exceptional photographer, Katarzyna Cepek offered, “The lineup was excellent tonight. All three bands delivered solid performances, and Ghostbox was absolutely the perfect local opener – they didn’t sound like a ‘local’ band and their style fit well with the others.” Justin Yount threw in: “Excellent show! The Olympic was packed!” All three of these bands are dominant in what they do and are noteworthy to watch. A night full of some of the most talented musicians and high energy craftsmanship. They all navigated the tiny stage like it was their home and created an environment I would love to lock myself up and stay in, sans some of the not so impressive crowd.  Make sure you support Ghostbox, Telekinetic Yeti, and Red Fang in all forms.