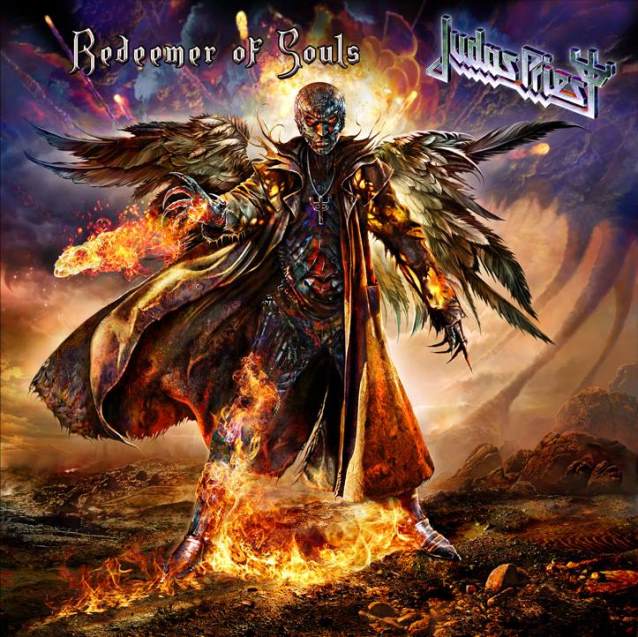 Six years have passed since fans last had a taste of new Judas Priest music, the last being 2008’s multi-disc concept effort, Nostradamus. This month not only brings a hellacious slab of classic Metal Gods mastery, it marks a new chapter in the Book of Priest. The aptly titled, Redeemer of Souls is the band’s most fully realized studio effort since 1990’s epic album, Painkiller.

Redeemer of Souls marks the recording debut of guitarist Richie Faulkner who replaced band co-founder K.K. Downing in 2011. It also features Faulkner’s writing debut as all the album’s songs were written by Faulkner, vocalist Rob Halford and guitar legend, Glenn Tipton. Taking nothing away from Downing, Judas Priest sound revitalized across the 13 tracks on Redeemer of Souls. The arrival of Faulkner has breathed fresh life into the creative lungs of the band.

“Dragonaut” arrives with a foreboding clap of thunder and immediately rips into vintage 80’s era Priest. Big beefy riffs and a melodic chorus combine with Halford’s powerful delivery of ominous lyrical portent. If this were 20 years ago, the album cover would likely have featured a mammoth machine-like dragon beast scorching the world into a wasteland. Drummer Scott Travis is at his skin crushing best, propelling the song forward.

The title track is a sonic reminder that Judas Priest has returned to purify us through the fire of heavy metal, redeeming our souls with the power of the almighty riff. Meanwhile Faulkner and Tipton dip back into the 70s Priest fretwork playbook for “Halls of Valhalla” which as epic a piece of brilliant heavy rock music as anything the band has ever created. Fans who have been claiming Halford’s lost the magic of his early years will find themselves chastened here when he takes us through the many nuances of his repertoire, including the Halford ascending, banshee shriek. Age may have stolen some of the high end, but the wisdom and vocal dexterity he has gained as the Metal God proves out through his ability to utilize his full arsenal.

“Sword of Damocles” is a track Amon Amarth is going to wish they had written, with its rolling guitar intro and folk-like rhythms. It sweeps to and from in a nice mid-tempo dance and addictive chorus. “March of the Damned” offers up more classic Priest riffage, though Halford’s intonation almost takes on an Ozzy-esque quality.

Like all Judas Priest albums, the songs are built around the riff: “Down in Flames” opens with a spiraling lead guitar chorus, followed by crisp, crushing riffs and the trademark rumble of Ian Hill’s bass. Screaming for Vengeance–era guitar work opens up “Cold Blooded” and recalls a companion track to 82’s “Bloodstone”. “Metalizer” is a relentless buzz-saw that recalls “Freewheel Burning” in its propulsive attack.

Judas Priest goes all the way back to its early blues roots from the debut Rocka Rolla album for the crossroads-like track, “Crossfire”. It is a rather unexpected and intriguing twist near the three-quarter mark of the record. The band had shed its blues foundation for the most part by 1980’s British Steel album, but here, the swing and groove of the song is a nice touch, helping solidify the feel of the album’s career encompassing vibe.

The album closes out strongly with “Battle Cry” which recalls the Painkiller era, and “The Beginning of the End” which is a modern companion to “Dreamer Deceiver” from 1976’s Sad Wings of Destiny.

Throughout Redeemer of Souls, Judas Priest redefine the band’s iconic sound by blending all eras of the legacy of its sonic signature. Inspired performances all around and well-crafted songs make Redeemer of Souls the best Judas Priest album since Painkiller, and arguably would have been the successor to said album had Halford not taken hiatus from the band in ’92.

That said, there are a couple of songs on the album that should have been relegated to bonus tracks for the die-hard fans, and conversely it is highly recommended that you purchase the deluxe edition which contains five extra songs, two or three of which would have been strong editions to the primary release. I will take all 18 tracks and enjoy them thoroughly after nearly a quarter century without a proper Priest record.

Soapbox: Now to all the metal elitist, nostalgia naysayers who will pound the drum of discontent as they live hopelessly in the past: A band cannot recreate an era that is past. It was a moment in time that must be appreciated for what it was and is. This is a new era, and a good half the songs on Redeemer of Souls would have been heralded as masterpieces had they been on a Priest album in the 70s or 80s, so get your heads out of your collective arses and live in the present long enough to redeem your metal spirit.