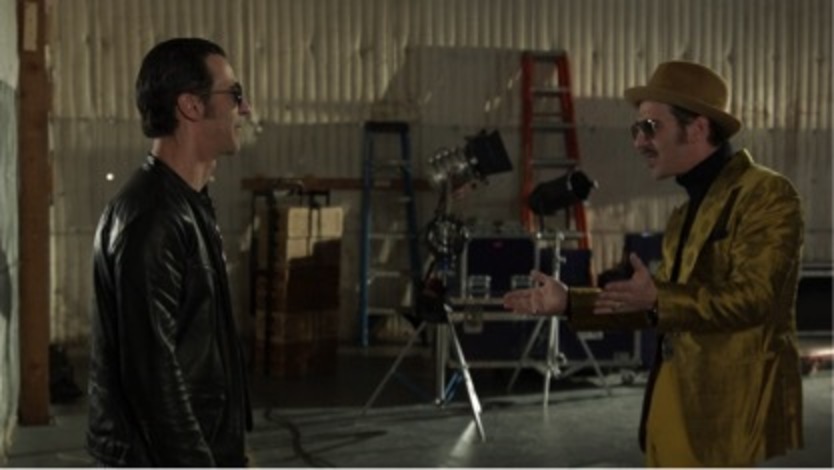 Today Godsmack premiered the official music video for ‘Bulletproof,’ the lead single from the multi-platinum band’s upcoming When Legends Rise album that’s due out April 27 via BMG. Directed by filmmaker Troy Smith, the satirical clip documents the band’s quest to make a new video.

In the video, Godsmack’s manager–played by actual manager, Paul Geary–suggests that it’s time for the band to expand their fan base by working with new (and clueless) video directors, including one played by Sebastian Bach and another by Billy Ray Cyrus. After being pitched a host of awful ideas, Sully Erna decides to hire his cousin, Salvatore Pasquale from Sicily, Italy.  Everything hilariously goes wrong at the shoot, climaxing with the set catching fire and, ultimately, the destruction of the video files.

View the video/short film below:

.Q&A with Sully Erna of Godsmack and Salvatore Pasquale:

Q: Who wrote the script?

Erna:  I wrote most of it and had some contributions from Troy Smith and Kenny Funk

Pasquale:  This a scripta was a no good from beginning. I tella Selly, Why you no call me before.  I could make a you something so stronga. But no, my cousin, he no like no help from a no one.  So now looka what happen.

Q: Do they want it described as a mini-film or something else?

Erna:  Yes!  It is a short film/music video.

Pasquale:  You no hear me when I speaka? This a no filma. This a something like…I don’t a even know what it is.

Q: What was the inspiration to take this approach for the video?

Erna:  We just really enjoy having fun and laughing.  Music is about entertainment just as much as it’s about the art.  And we want to share what we do with audiences of all ages.  The band discussed having me direct this debut video, so I just ran with that concept and twisted it up.  Comedy is nothing more than reality exaggerated. And anyone who doesn’t enjoy a fun video like this, is simply taking life much too seriously.

Pasquale:  I no wanna do this approacha…Selly no nothing about making a filma. Next time-a you wanna make a something nice, you call-a Pasquale and he make a you best video eva!  Molto Bene! I no need answer no more. Ciao!

For more information on GODSMACK, please visit the following: