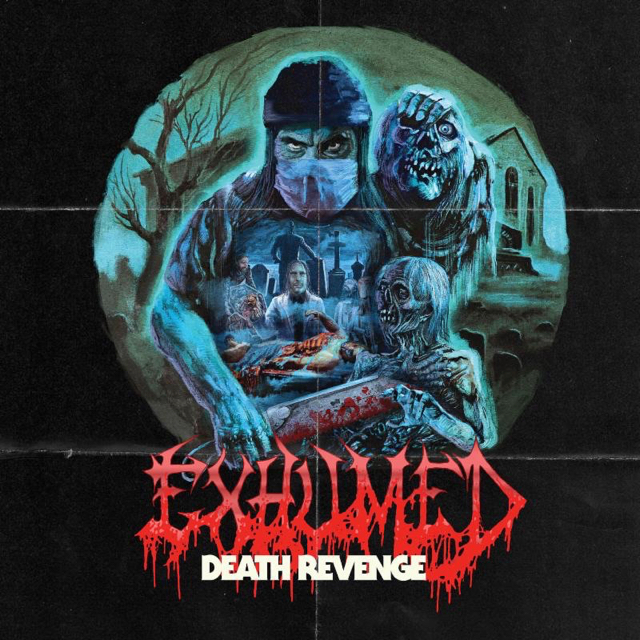 That’s right, you read correctly-Exhumed just cranked out a new record! This is the North Californian outfit’s 8th studio album. Just in time for the Halloween season! That’s not even the best part. According to Relapse, Death Revenge is a “macabre concept album about a series of brutal murders and grave robberies in 1820’s Scotland!”

With that being said, it’s hard to go into the album after listening to works such as All Guts, No Glory or Gore Metal without expecting something much more thoroughly dissected and carefully orchestrated.

The 45-minute barrage starts off with an intro track aptly named “Introduction: Death Revenge Overture”. You can certainly hear the homage paid to preceding horror movie scores within it. Other instrumentals like this one are embedded within the track list such as “The Anatomy Act of 1832”.

Being a rather large fan of the band, I have explored the side projects that have stemmed from them. From Ross Sewage’s Ghoul and Matt Harvey’s Expulsion (which I have reviewed for you lovely people in the past) and his heavily Death-influenced band Gruesome. If you do the same, you can hear the subtle elements they have created within their respective groups in this record. I think the biggest thing I noticed was the fact that Exhumed has just gotten thrashier and thrashier over the years. For instance, “Incarnated Hands” starts off like something you might hear on Death’s Individual Thought Patterns (“Trapped in a Corner” comes to mind). As they tap this metaphorical vein of thrash, they still present themselves as the gory death metal maniacs we have come to love. The wicked brew of the two makes a rather dastardly combination.

The overall flow of this album is awesome. It went by so fast, and I was ready to start it all over again (which I did–several times.) Harvey’s relentless fretwork is mind-boggling. The intent behind every note in his soloing, riffs, etc. is very admirable. Often times bands in the same pool as Exhumed have a tendency to either a) Improvise their solos in half of their discography (we’re looking at you, Kerry King) or b) Write shitty quality material and mash it together like clay to form an amalgamation of notes that sounds okay because it’s faster than hell and heavy as balls. But I digress.

I can’t go without mentioning the brutality that is Sewage’s voice paired with Michael Hamilton’s drumming. The way they align with one another’s rhythmic patterns is downright petrifying. In tunes such as “Lifeless”, which has various transitions from blast beats to fast thrash beats in it. The tongue-tying lines alongside Hamilton’s assault is nuts, for lack of a better word.

This album exceeded my expectations in spades, and has proved to be a formidable opponent within my favorite albums of 2017. The ball is in your court now. Go buy the record and see what you think!