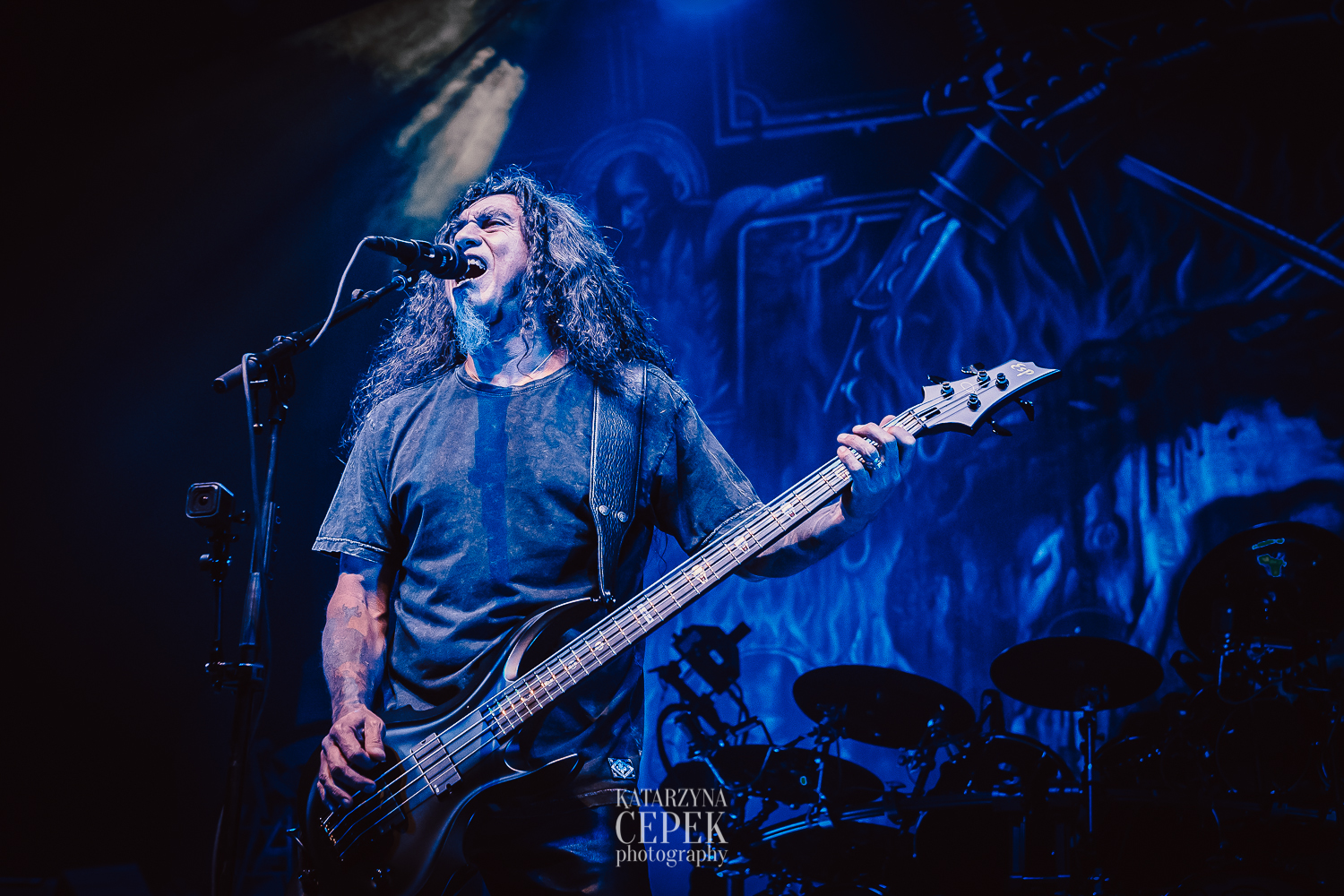 Unholy hell! Slayer ​just played in Idaho for the last time (and a lot of other places for that matter). That is of course because the pioneers of thrash are hanging up their collective pairs of leather pants. To sweeten the deal, they brought brothers in arms Anthrax​ and Testament​, as well as groove metal giants Lamb of God​ and motherfucking Napalm Death​ on tour with them.

After being disappointed about arriving directly after Napalm Death’s​ set, I was met by friends who boasted of how “bitchin’” it was. The majority of them came back and said they had a better set than Slayer,​ but I cannot speak on behalf of them sadly.

The first thing I noticed when Testament​ took the stage was Alex Skolnick ​(what? He came out first…) but the second thing I saw blew my brains out of my nostrils: Gene Hoglan sitting behind the drum kit. As a huge Death ​fan, it was really cool to see the master at work. Testament’s​ set was ferocious, including a heavy dose of their 1988 album, New World Order as well as digging out classics like “Practice What you Preach,” “Dog Faced Gods,” and “The Preacher.” . Their performance was solid and crushing. Chuck Billy​ is a magnificent frontman and is amazing at communicating with the crowd. He brought a little metalhead on stage. The crowd absolutely ate it up. Of course, Skolnick ​was mesmerizing to watch dance around his fretboard as was Eric Peterson (who has a new Dragonlord album about to drop), and Steve Di Giorgio was a beast on bass. I would pay to see them again very soon.

Anthrax​ put a boot to people’s throats that I think came to a surprise to some. In honor of the late Vinnie Paul​ and Dimebag Darrell​ (formerly of Pantera​) they opened their set with the beginning of “Cowboys From Hell” and closed their set with the last bit of it. I thought this was a pretty cool substitution since they didn’t have enough time in their set to play ‘’In the End’’, which is performed to also commemorate Ronnie James Dio​. People got “caught in a mosh” right out of the gate and they kept the energy alive and wired to everyone in the crowd. The set included “Got the Time,” “Antisocial,” “Be All, End All,” “Madhouse,” “Evil Twin,” and of course, “Indians.” Joey Belladonna still sounds fantastic, and it never gets old watching Scott Ian bound about the stage.

A side note, both Belladonna ​and Chuck Billy ​called out the stoners on the lawn which was hilarious to see.

I watched Lamb of God​ from the top of the green in hopes to recharge after losing steam in the previous 2 pits. I was jealous of how big the circle got compared to the ones before, especially when Randy Blythe​ instructed people to make it grow during the closer, ‘’Redneck’’. They opened the set up with the double whammy of “Omerta” and “Walk with Me in Hell,” The set featured three songs each from 2004’s Ashes of the Wake and 2006′ Sacrament albums. Oddly they chose not to perform anything from their new Legion: XX record.

Last but not least, the reason for the season of abyss, Slayer​. This was the most emotional performance I have seen in my concert-going experience. The lot of them knew how loved they were when they came and played their fucking guts out. The stage set up was a dowsing of cream and a cherry on top of their performance. When they reached the end, I thought I was content. They played the badass tunes you’d expect, (“War Ensemble,” “Hell Awaits,” “Mandatory Suicide,” “South of Heaven,” Reigning Blood, “Chemical Warefare”…) as well as ones you didn’t (i.e. “Dittohead,” “Payback,” “Jihad,” etc.). The setlist spanned the breadth of the band’s iconic career. When the bloodletting ended with “Angel of Death,” I was worn out, my iPhone trampled, and my spirit both soaring and gutted. Then frontman Tom Araya ​stood in front of a microphone center stage spotlighted and gave the most heartbreaking farewell.

And like that, it was over. In a flash without warning. A legacy, a lifetime. Who knows what the future holds for any of these gentlemen? Certainly not them, so it’s hard to make assumptions about what will become of all of their respective careers. Only time will tell… We thank you, Slayer for nearly four decades of relentless and extreme metal.

MARTY FRIEDMAN To Unleash ‘ONE BAD M.F. Live!!’ In October