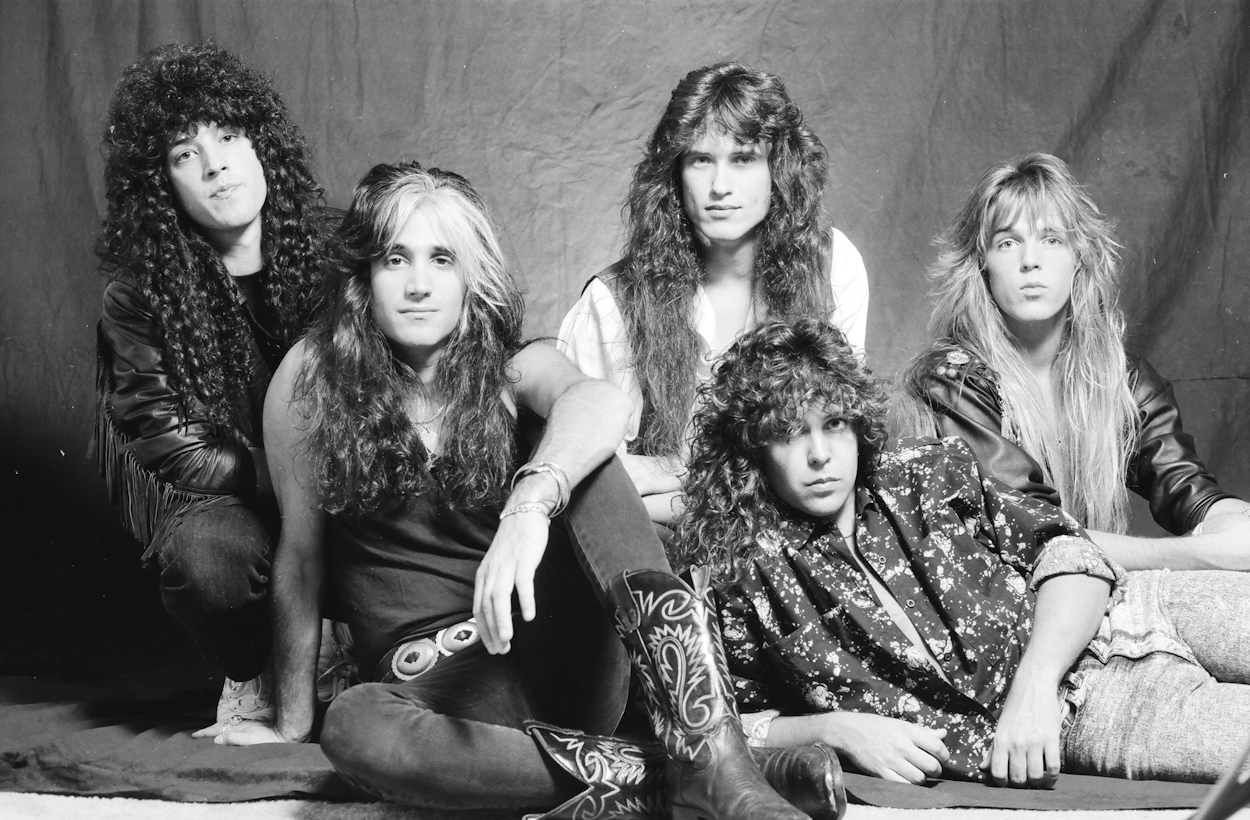 When guitarist Marc Ferrari initially walked away from Keel in 1988, the wave of commercial metal still flourished. Little did anyone know that same flannel clad Seattle rockers were about to mud stomp the hard rock industry with a whole new sound. Ferrari had plans to launch his own self-named solo band, which ultimately developed into Cold Sweat. A series of events conspired to drag the band’s debut album release into 1990. By the time Break Out saw the light of day, grunge had emerged and musical tastes had begun to change. Despite this, the album had a nice cult following among the fans who clung to the 80s hard rock/metal style, and tours with Dio and Savatage helped give Cold Sweat a boost.

Ferrari wisely surrounded himself with other fantastic players, including guitarist Erik Gamans (ex-Waysted), bassist Chris McLernon (Saigon Kick), drummer Anthony White (ex-Mark Slaughter), and singer Roy (Rory) Cathey (ex-Gilbralter). Break Out was produced by the legendary Kevin Beamish (Y&T, REO Speedwagon, Saxon), and resonated with energy and bluesy swagger. This month, a remastered version of Break Out has been re-issued, and Marc Ferrari checked in to chat about the re-release 28 years later.

You guys were kind of victims of bad timing when that record first came out in 1990. 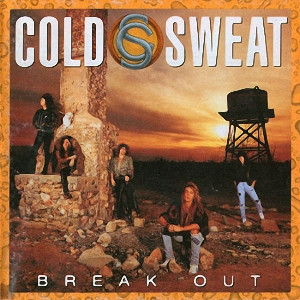 I’m not going to deny that. It wasn’t the only reason our trajectory wasn’t what I hoped it would be. You’re certainly correct in that by 1990 we started to see some shifts in musical tastes. I started the band as soon as I left Keel in 1988. I did the first sets of demos with Oni {Logan, original vocalist]  like a month or two later. I honestly thought that we were going to be able to get a record out in 1988. We were still riding the commercial hard rock wave back in ’88 with Bon Jovi‘s New Jersey, and Winger, and Warrant, and some other bands had some really big albums that year. So commercial hard rock was still the flavor of the month back then. By 1990 you started to see a shift towards the grungier side of things, and by 1991 when the Nirvana album was released it was a whole new ball game. Cold Sweat, unfortunately caught the very last tail end of the commercial hard rock wave, and there were some other factors on the label side that didn’t help us. We were on a label (MCA) that wasn’t really known as a hard rock label at the time. We didn’t get a lot of promotional support out of those guys. And then there’s just dumb luck. Sometimes you just have to throw your hands up and accept that fate doesn’t always go the way that you want it to. go. But Cold Sweat made a real solid record. I still think that it stands the test of time today. I’m very proud of the record. It was well-crafted, well-written, and well rehearsed. Great players in the band. Great production value. It just wasn’t enough to get the ball over the goal line (laughs).”

Sonically there were certainly some of those hair metal elements on the record, but you guys really infused the record with a lot of bluesy swagger and aggressive energy more than anything else. That seemed to be the great focus.

I’m a blues-based guitar player. That’s where that comes from.  I grew up listening to lots of blues-based players. Not only the big three of Kiss, Led Zeppelin, and Aerosmith, but guys like Johnny Winters, and Pat Travers, and Robin Trower, and Rory Gallagher. So it’s only natural that element of my guitar playing and writing comes through. We had ‘Cryin Shame’, which was a great hard rock, blues track; ‘Killing Floor,’ ‘Fistful of Money,’ and even ‘Jump the Gun,’ which is more of a Foghat type tune…So certainly those elements come through in my playing, and I’m damn proud of it (laughs)!”

You got to work with Kevin Beamish on the record who did some great stuff with Saxon and Y&T. Tell us a bit about working with him. 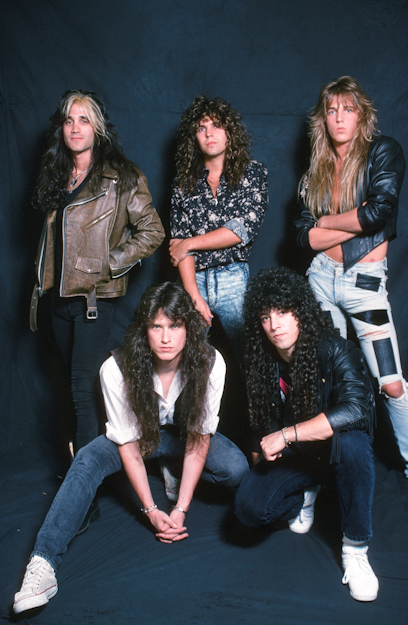 Kevin also produced the Keel single ‘Rock ‘N Roll Outlaw’ in 1987. That was my first time working with Kevin. So we were big fans of Kevin’s work. Y&T was the one artist we really thought we were similar to. We loved their combination of commerciality, rawness, and power and passion. Great playing and great arrangements. Kevin also very famous for his work on all the big REO Speedwagon albums. So Kevin seemed to be the natural choice. We did meet with a lot of big name producers, like Eddie Kramer, who is obviously famous for Jimi Hendrix and Kiss, and Frampton, and everybody else. There were a couple of other big producers we met with, but we just got a great vibe from Kevin. He’s a Southern California guy, and we just loved him. He was a great idea guy, and very helpful in tightening the arrangements and making sure he was getting good performances out of us. He really pushed Roy [Cathey] pretty good to get the best out of him. Not to say we didn’t have our disagreements, but Kevin, I think, was the right guy for the job.”

My favorite track on the album is the opener, “Four on the Floor” which you wrote with brother-in-arms Tommy Thayer (Kiss). I think that was was during his post Black ‘n Blue, Harlow era. Tell us about that track.

Well, I’ve always been car-centric. I’ve always loved car songs, going back to ‘Highway Star’ from Deep Purple. Keel had ‘Speed Demon.’  ‘Autoblast’ by Black ‘N Blue. Man, I still love that song. With a last name like Ferrari, it’s only natural to want to sing about cars. That came about because we wanted a great opening song. I think it was my title, and Tommy was very helpful with some of the musical arrangements of it. I think that song really sets the tone for the rest of the record and certainly gets people up out of their seats right after the opening music comes on. you know the band means business with a song called ‘Four on the Floor.'”

You added in a fantastic cover of Willie Dixon’s “I Just Want to Make Love to You” to close the record out. You seemed to take what Foghat did with it, and amp’d it up even farther.

I’m a huge Foghat fan, and we always loved that song. I think we played it live before we ever put it on the album. It’s a song that gets the girls going, and everybody loves that song. It’s just one of those songs that really lends itself to a rock interpretation of it. You have to look at those songs, ‘Four on the Floor’ and the Foghat cover as being bookends, you have a really fast, hard burner on one side, and you’ve got this really fun, hard rock version of a classic song on the other. It’s like a sandwich. You’ve got the two pieces of bread on the outside and the meat in the middle. That’s the why I like to look at that album.”

Even though Cold Sweat didn’t last long, you got a chance to do some amazing touring with Savatage and Ronnie James Dio. I think you were even managed by Wendy Dio. What was that experience like for you guys?

Touring is always fun. We did three or four tours and the Dio one wasn’t the first. Think we went out with Sleeze Beez first. We also did a tour with Savatage, and we did one with Child’s Play after the Dio tour.  We’re rolling back almost 30 years here. The first two were mostly clubs. so we were up there in the face of the audience really seeing people right in front of you. The Dio tour was obviously bigger venues. We were playing large theaters and arenas. I’d had the experience of playing arenas before, but the other guys hadn’t.  They took to it like a duck to water. Our singer, Roy is great frontman and singer. Very entertaining. very commanding. He really knew how to work an audience.  I remember the Dio dates being a blast to be on. Ronnie took great care of us. he really cared for us. We were the opening band on a 3-band bill with Love/Hate. in the middle on that tour. Anytime I can strap on a guitar and stand in front of a Marshall amp, I’m a happy guy.”

I’d be remiss if I didn’t ask if you had a fond Ronnie memory.

We had lots of fun times together, but the last day of the tour;… That’s always when all the fun pranks come out, the shenanigans, and all that.  They poured flour on us. It was pretty crazy. I didn’t know it was going to happen. All of the sudden all of this flour came down from the lighting rig, and we were all sweaty so it stuck to you like dough. It was just the funniest thing. Ronnie has a serious side, but he also had a fun side too. he was a prankster. I remember that for sure. We had a lot of great meals together. he was just a wonderful guy. Real warm, outgoing, and caring guy, and I miss him tremendously.”

Check out the full interview with Marc below as he talks about Oni Logan leaving the band on the day they were set to start recording, and the long and arduous process of finding his replacement in Roy Cathey. We also discuss more songs on Break Out as well as his deep connection to Pantera. Pick up your remastered copy of Break out now.

HELION PRIME Interview: Jason and Mary Have All the Answers to ‘Question…

MINDMAZE Interview: Sarah Teets on the ‘Roads to Madness’ and Unwavering…

A SOUND OF THUNDER Interview: Living Life in a Parallel…

HELION PRIME Interview: Jason and Mary Have All the Answers…