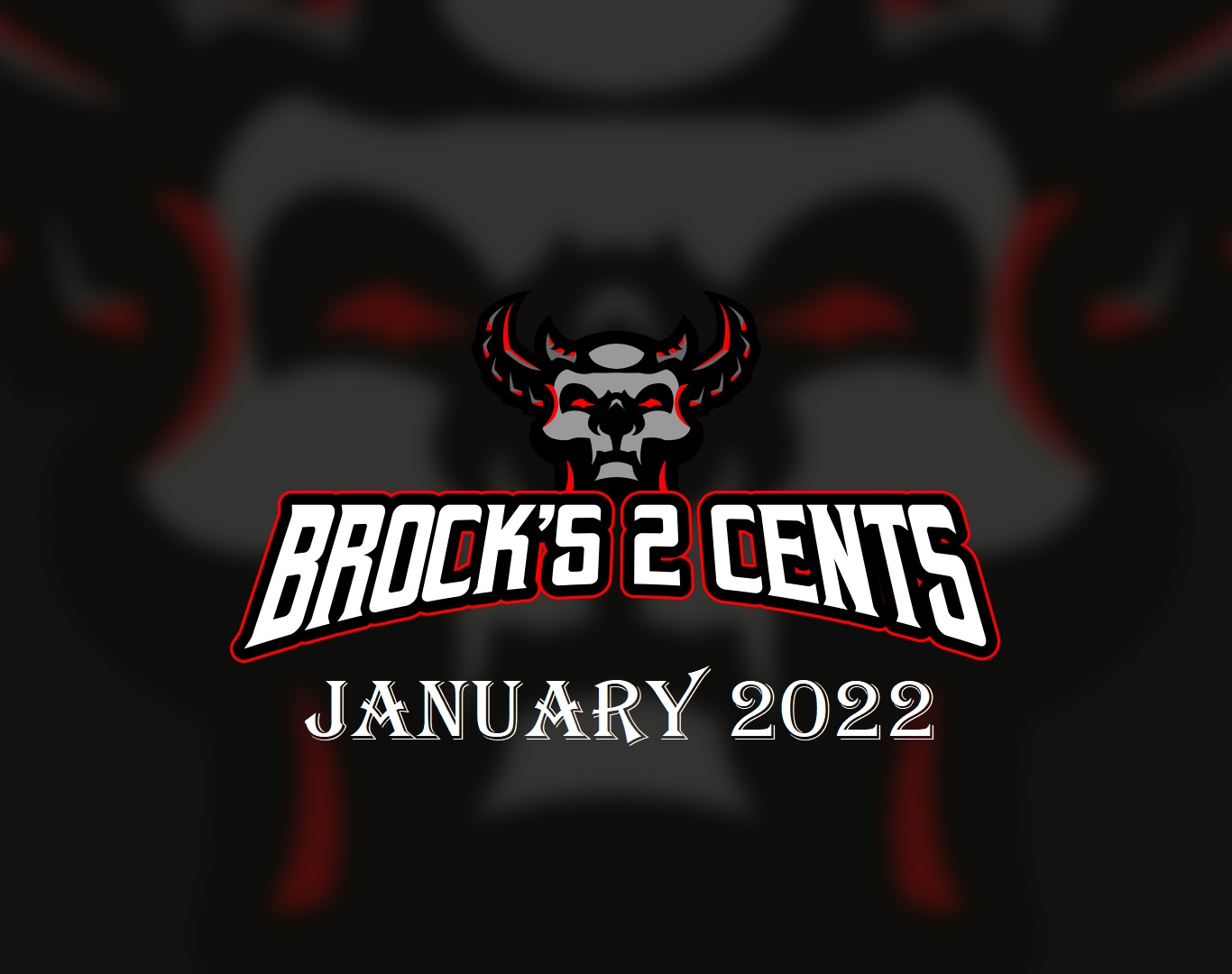 Like every year, It’s January and time for “what did I missed in 2021” reviews:
So, here are my reviews of albums I missed in 2021 that I think you should know about, aka cleaning house from last year. Also, I’ve included my best of 2021 lists! February I’ll be back to reviewing new albums from 2022. Forget about these in-depth reviews, I’m bringing you quick reviews on multiple releases to help you guide your way through the METAL world today!
BASICALLY, THIS IS JUST MY OPINION, LIKE IT OR NOT…
Ratings: [0(sucks) to 5(awesome)]
{Format: Band – album title = rating |label |style of metal. review} 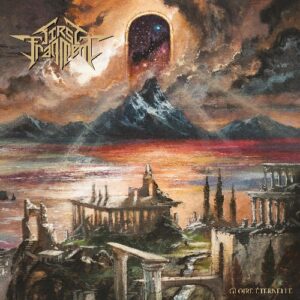 FIRST FRAGMENT – Gloire Eternelle = 4/5 |Unique Leader |TECHNICAL DEATH METAL
Like every year, there’s an album or two that I’m seriously pissed off that I missed and Gloire Eternelle is the first one. This is one of those albums that would have been in my top albums of the year list if I’d known about it. Their debut EP The Afterthought Ecstasy and first full length Dasein were both solid uber technical DM albums, but Gloire Eternelle has taken things to the next level. This is beyond and above in the tech genre and has set the bar at a new level. With a huge influence of neoclassical vibes mix with technical DM Gloire Eternelle is very close to being a masterpiece, we’ll have to see how this stands up over time. This just blows your mind when you sit down and really listen to all the insanity that’s going on here. From flamenco to neoclassical to uber shred to blasting tech DM to progressive grooves to jazzy vibes this album is packed from start to finish. Gloire Eternelle is definitely a journey which can be overwhelming on first listen and most likely taken multiple times to full grasp everything that’s happening here. Their best album and probably the new standard for uber technical DM!
ffo: NECROPHAGIST, SPAWN OF POSSESSION, BEYOND CREATION, CYNIC, OBSCURA, CACOPHONY 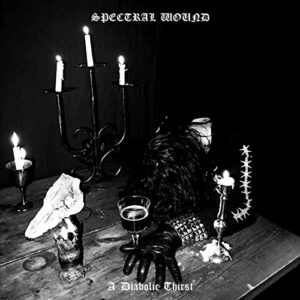 SPECTRAL WOUND – A Diabolic Thirst = 3.75/5 |Profound Lore |BLACK METAL
Most albums that I miss come out near the end of the year, but I have no excuse for this one and I’m highly pissed I missed this one that came out back in April. Their first two albums were damn good. A Diabolic Thirst, their 3rd album, is their best album yet! I’ll admit it, I’m kind of an elitist when it comes to BM because I mostly like European and a very small group from the USA. So, me enjoying a BM band from Canada is rare but SPECTRAL WOUND is f’n incredible! A Diabolic Thirst is BM, nothing extra, just solid what you’d get from back in the day BM. Mixing enough elements of raw, melody, frigid cold atmosphere, and blasting to remind you when BM bands were at their peak in the ’90s. I highly recommend checking this out! This is definitely in my top 10 of BM albums for 2021! 6 tracks, 3 are killer and 2 are good.
ffo: SETHERIAL, SARGEIST, DODSRIT, MGLA, GORGOROTH, SATYRICON 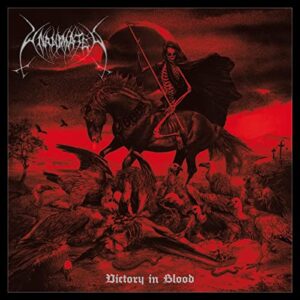 UNANIMATED – Victory in Blood = 3.5/5 |Century Media |MELODIC BLACKENED DEATH METAL
The third album I’m most pissed that I missed last year is the latest offering from UNANIMATED. In the early creation of the melodic black/death metal, UNANIMATED released two groundbreaking albums in `93 and `95 with In the Forest of the Dreaming Dead and Ancient God of Evil and like a lot of bands stamped their mark on the scene and then broke up. At the same time in Sweden the Gothenburg sound busted wide open but UNANIMATED was created with the darker, creepier sound of melodic blackened DM and influenced many bands. Then in 2009 they returned and released a new album, In the Light of Darkness which was solid but not as good as their previous albums. In 2018 we got an EP of 4 new songs that were good and very promising for future material. One of my biggest pet peeves is albums being released in December because most get skipped or not noticed till the next year and that’s what’s going on now. UNANIMATED is back with no compromise to prove they are still at the top of their game! One of the creators is back at it and crushing the genre! This is a must! 12 tracks, 4 are killer and 5 are good!
ffo: DISSECTION, NECROPHOBIC, EUCHARIST, DAWN, BORKNAGAR, GOD DETHRONED 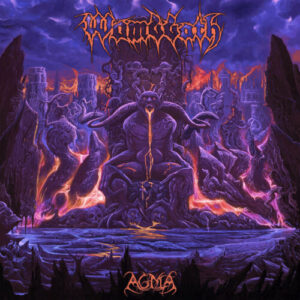 WOMBBATH – Agma = 1.75/5 |Transcending Obscurity |DEATH METAL
I’m a big fan of WOMBBATH and loved Internal Caustic Torments from back in the day and was super excited when they reformed in 2014. Since then, the band has wasted no time and has put out 4 albums [(side note: The Great Desolation was f’n incredible and as good as Internal Caustic Torments)] with Agma being the 5th. This time around though, there’s a major shift in sound. WOMBBATH has always delivered that old school HM2 DM worship with a modern touch but now Agma has melodies and atmosphere galore. Now don’t get me wrong here, WOMBBATH knocked it out the park if this is what you like but I’m not ready for this. This is not what I want from WOMBBATH. I understand you need to grow, can’t keep doing the same thing, etc., etc… It’s a damn good solid album, but a little bit too long and overall, not for me, it’s my least favorite album. In my opinion, hopefully this is a one off, because I’d rather hear a return to the OSDM. Check it out and make your own opinion. 16 tracks, 3 are killer and 7 are OK.
ffo: EDGE OF SANITY, GOD MACABRE, HYPOCRISY, BENEDICTION, GODGORY, CATTLE DECAPITATION 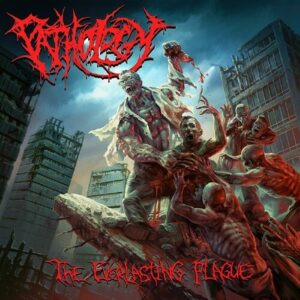 PATHOLOGY – The Everlasting Plague = 2/5 |Nuclear Blast |DEATH METAL
PATHOLOGY has been a long and varied path since their creation. With their first few albums they were at the top of the brutal DM genre then shifted gears a bit to more technical and started to include some melody and other different aspects compared to their sound. I’ve enjoyed all their albums, but their first four albums are incredible. This album came out of nowhere and didn’t see anything about it till it was released. Very similar to their last four albums, blasting DM with some technical riffs, melodies and some atmospheric vibes that are long gone from the first few albums they released. It’s a decent album, solid but overall, nothing special. If you’ve enjoyed from the album Lords of Nephaim to Reborn to Kill, then this will be right up your alley. Personally, I would like more of a return to the brutal DM of the early albums. Other than that, it’s still a decent release. 12 tracks, 4 are killer and 6 are OK.
ffo: CEREBRAL BORE, ABORTED, CATTLE DECAPITATION, INGESTED, BENIGHTED 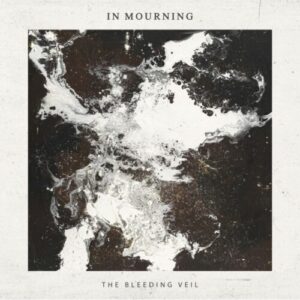 IN MOURNING – The Bleeding Veil = 2/5 |Dalapop |PROGRESSIVE/MELODIC DEATH METAL
Here’s a band that I like but doesn’t listen to often. IN MOURNING has been balancing that fine line between Euro melodic DM, progressive gothic/doom and early OPETH vibes since their creation about 20 years ago. I usually stumble across them going through my stuff and jam to their albums about once a year. The Bleeding Veil is their 6th album and like all their albums its consistency. Every album has a few killer tracks, a few OK tracks and 1 or 2 that suck then that’s it. Their albums Shrouded Divine and The Weight of Oceans are more my favorite while the others are OK, and The Bleeding Veil falls into that OK category. I guess you can say there’s enough gloomy doom-ish parts to lose my interest mixed with enough aggressive melodic DM parts to hold it. If you like some doomy/gothic vibes in your melodic DM, then check this out. 7 tracks, 2 are killer and 3 are OK.
ffo: OPETH, BARREN EARTH, SWALLOW THE SUN, PERSEFONE, INSOMNIUM, OCTOBER TIDE 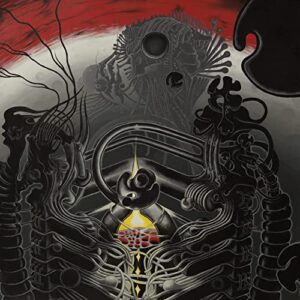 DEVIANT PROCESS – Nurture = 2.5/5 |Season of Mist |PROGRESSIVE DEATH METAL.
This Canadian band returns for their sophomore album of uber technical/progressive DM. Their debut Paroxysm was f’n incredible. Nurture is kind of over-the-top album with technical riff wizardry and a strong dose of CYNIC and OBSCURA vibes but also a touch uber jazz influences. DEVIANT PROCESS are spectacular musicians and this album shines compared to other tech DM albums, but it also runs into the normal problems of being too technical/ultra-show-off with not much soul/feeling to the songs. On one hand the technical aspect is incredible but on the other hand just the normal listening is missing something compared to their debut album. Nurture feels like some of the song writing doesn’t full catch the mood or soul of the song. This also has that grows on you type factor too, probably a year down the road I may like it even more. 8 tracks, 1 OBLIVEON cover, 3 are killer and 3 are OK.
ffo: CYNIC, BEYOND CREATION, NEURAXIS, MARTYR, GOROD, OBSCURA, OBLIVEON 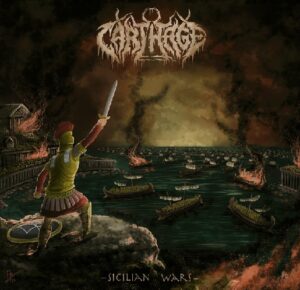 CARTHAGE – Sicilian Wars = 3/5 |Amputated Vein |BRUTAL DEATH METAL
3 years hitting us with their sophomore album Sicilian Wars is the next the title represents the history lesson, that covers the bloody conflict between Carthage and the Greek city-states over Sicily. CARTHAGE fine-tuned their sound even more with razor sharp riffs, crushing head-banging grooves, tech bass riffs and fast paced insanity. Sicilian Wars is even more pissed off and vicious sounding from their debut album. This definitely reminds me of all the extremely fast paced brutal DM bands from early 2000s. No melody here just straight pummeling you into the dirt with the average length of each song under 3 minutes. Way better than their debut, CARTHAGE is heading in the right direction with their blasting brutal DM! Definitely worth checking out! 10 tracks, 4 are killer and 3 are good.
ffo: HATE ETERNAL, MASS INFECTION, GORGASM, INVERACITY, HOUR OF PENANCE, DEFEATED SANITY 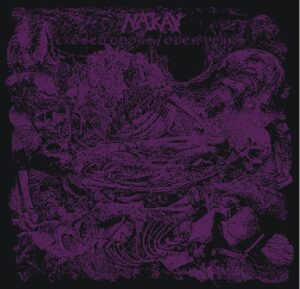 NAK’AY – Closed Doors / Open Veins = 3/5 |Shattered Dreams |GRIND
In true grind fashion, NAK`AY has been blasting out splits since 2010 and finally they’ve released their first full length album. Closed Doors / Open Veins is 14 minutes of ear blistering Grind core from Indiana. Their most intense material to date. The production is solid and heavy sounding. Straight to the point, a light dusting of grooves and full-on non-stop insanity is what’s packed in their debut album. Top notch grind coming from this band, and I highly recommend checking it out! 17 tracks, 6 are killer and 8 are good.
ffo: INTERNAL ROT, INSECT WARFARE, PHOBIA, ASSUCK, EXCRUCIATING TERROR 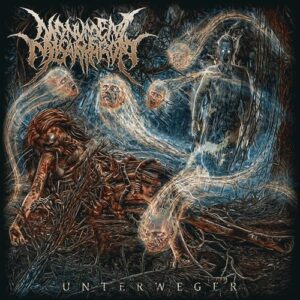 MONUMENT OF MISANTHROPY – Unterweger = 2.5/5 |Transcending Obscurity |BRUTAL DEATH METAL
I heard their debut album Anger Mismanagement and really liked it. Then a few years later their EP, Capital Punisher was a solid release then founding members broke the band apart while both was continuing on with the name, eventually the singer released a new album under the name with a whole new band and the sound shifted a bit, but Unterweger is another solid album from the band. Unterweger is a concept album about the serial killer Jack Unterweger. Unterweger‘s sound definitely matches that of modern DM bands and is definitely more vicious sounding than previous releases. Almost 40 minutes of uncompromising brutality, energetic riffs that bring a technical edge but also some melodic grooves to keep things interesting. 12 tracks, MORBID ANGEL cover, 3 are killer and 5 are good.
ffo: ABORTED, BENIGHTED, BLOOD RED THRONE, CANNIBAL CORPSE, INFECTING THE SWARM