Album Review: KORN – The Nothing 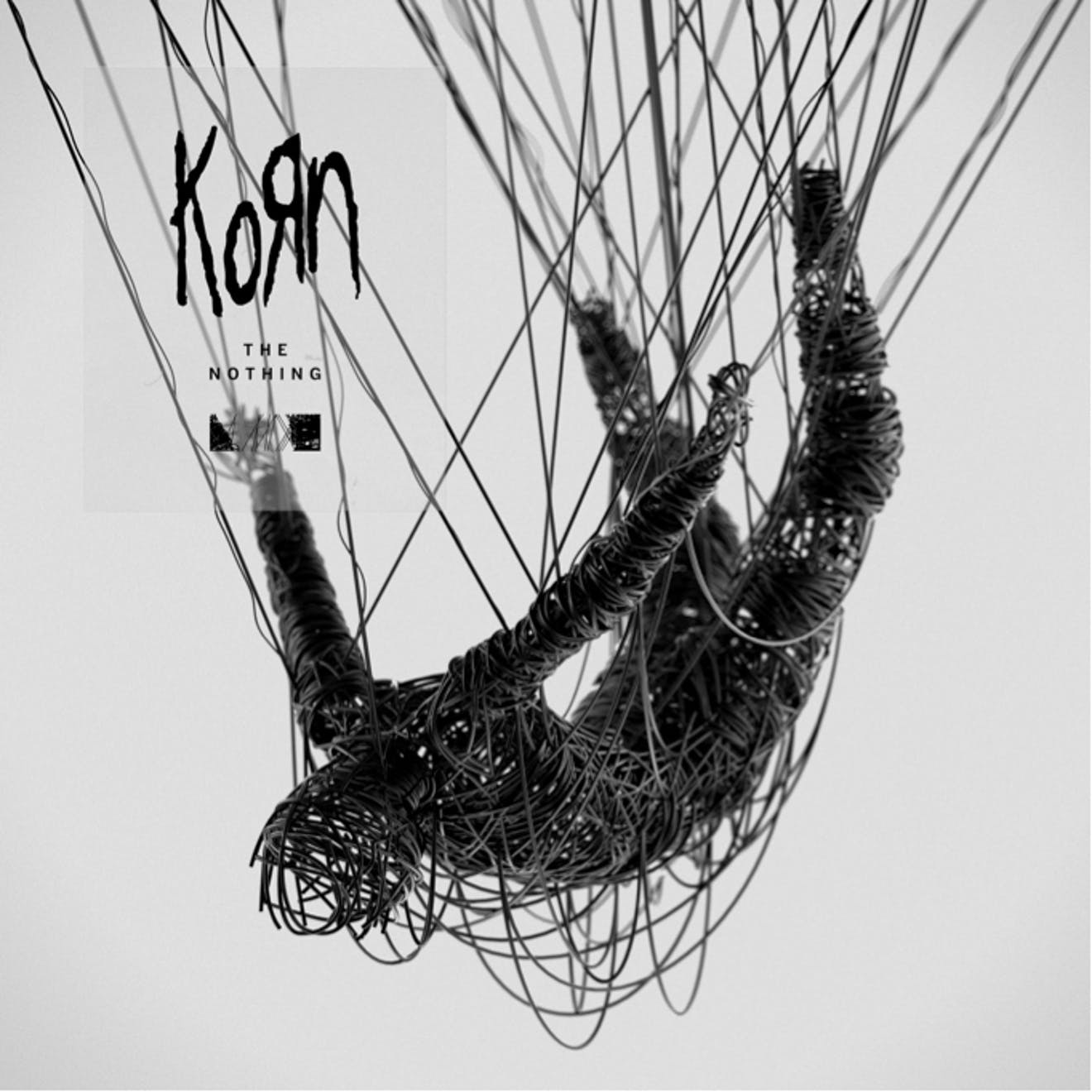 What word describes an album that is not only flawless, but takes you back to your past teenage hormonal experiences and pulls you into the present at the same time? Ironically nothing, which happens to be the title of Korn‘s newest album. The Nothing  bridges the gap between 90’s Korn  and their more modern era. It is a progression of their 1994 self-titled album, that was the soundtrack to many people from my generation, all the way to the modernized Korn the younger generation has grown to love. This is genius on their part. To bring these two worlds together in one album. I almost feel like I need to stand up and slow clap. I was one who jumped off the Korn wagon when they started to experiment. I understood it, and I appreciated their wanting to evolve, but I struggled with almost feeling abandoned as an original fan.

The Serenity of Suffering, Korn’s last release in 2016 started to give me that warm feeling back. The Nothing came in full speed ahead and completed the cycle of transition that will make the old fans feel right at home again. Jonathan Davis has never been discreet with his pain and suffering, and that is one element that makes them the mighty band they are. His brutal honesty and rawness brings people closer to him, as so many have felt what he clearly feels. He has a gift for digging into your inner soul and making it feel exposed yet beautiful. This album is no exception and might even be a better performance of this.

Korn began its feat in Bakersfield, California in 1993. Founding members Jonathan Davis (lead vocals, bagpipes), James “Munky” Shaffer (rhythm guitar), Reginald “Fieldy” Arvizu (bass), Brian “Head” Welch (lead guitar, backing vocals), and David Silveria (drums), began a nu-metal adventure and quickly became the powerhouses of this genre. Ray Luzier replaced Silvera in 2007. While there have been a few changes in this line-up throughout the years, they have settled back into the original four with Luzier remaining comfortably upon his throne. The Nothing  is Korn’s 13th studio album release, and it seems fitting it should drop on Friday the 13th..

The album begins with the track. “The End Begins,” which is a clever title to open an album. The track is full of pain, suffering, perseverance, love, and grief. This song is a short intro, with Davis playing his signature bagpipes and the sounds of a storm in the background. The drums come in as Davis starts to sing, “Why did you leave me? Why did you need me? Now they are free. And they are coming after me.” The bass hammers in with that recognizable Fieldy groove and Davis begins to scream “WHY?” At the end, you hear his painful and sincere cry. This reminds me of “Daddy” on the self-titled album and had me in tears, but also feeling Davis on the strong emotional level only he is able to make you feel. I was 13 all over again in a minute-and-a-half.

The  previously released single, “Cold” was my first taste of Korn‘s latest evolution. It is super heavy, the riffs are incredibly catchy in the vintage style. This is the first track you get to hear Head, Munky, Luzier, and Fieldy back in full action with their distinct sound. Davis’s vocals are extremely different though. He is more aggressive and his screams have reached a whole new level, almost like Randy Blythe level. While it does break into a memorable chorus, it does not take away from the fierceness of this song. It is absolutely incredibly written and executed.

“You’ll Never Find Me” begins with the discernible Davis vocals and another heavy riff. This song has also been previously released and is another sensational track. Toward the end, once again, they bring it back to their roots and deliver an unmistakable breakdown that will have you stomping and headbanging. This part completely sold me on the entire song. It ends with a screaming and singing Davis which coexist as his emotions continue to lay it all on the line.

“The Darkness is Revealing” pierces your heart in the beginning. This is where I feel the transition from the original Korn to the Untouchables (2002 release and 5th album) style begins. It is a bit more of Davis singing and a more melodic type rhythm, but it still has the breakdown elements and Head accents. It ends strong and heavy. “Idiosyncrasy” might be my favorite on this album. It has a riff that appeals to my ear strongly and has heavy breakdowns throughout. Davis has that deep scream again, but it is the lyrics that completely sell this one. The rawness of this track is painful to listen to, but again, it feels real and honest. It has an odd positive twist to it with a message of almost becoming comfortable with the darkness that life can bring. He speaks of not letting these dark times define who he is and bring him completely down. “Don’t give in” is aggressively shouted and he continues with the irony of the idiosyncrasy of his life. It is a beautiful rendition of the ebb and flows of struggles. This is my interpretation, I will be curious to hear what everyone else gets out of this song.

“The Seduction of Indulgence” is a quick two-minute song that makes yet another transition to the more contemporary Korn. There is something of a tribal drumbeat as Davis delivers his disturbing lyrics. “Finally Free” begins with the electronic sound they have adopted through their newer albums. This is where I think the genius lies within this record, as this brings Korn full circle musically, bridging the generational gap, as I previously mentioned. I never would have given this style a chance, and I can clearly now hear that the message and feeling is still the same. So I will just sit here in my wrongness and be wrong for not giving this era a chance. There I said it, let’s move on and past it.

“Can You Hear Me” continues the modern feel, but guess what, I am listening now and enjoying it. Davis sings, “Can you hear me cause I’m lost, and I can never come back again”. I think we can all relate to that lyric in one time of our life or another. “I know I’ll never be the same again”. I think it is probably clear how this album is most likely surrounding the death of Davis’s wife. He sings with the pain and familiarity of grief and loss. I feel this to the depths of my soul and with understanding.

“The Ringmaster”, starts to dig back into the heavier riffs yet still has the modernized vocals. Brilliant. Here is another full circle moment. It is haunting and impressive. There is even a moment of beatboxing in there. “Gravity of Discomfort” reveals yet another dynamic and vigorous intro. The vocals and sound take a strange turn that is difficult to explain, almost an extreme up and down, but it flows. It jumps back into rhythmic riffs yet has significant shifts. This one is challenging to put into words. “H@rd3r” opens with a bit of their signature piano that is abruptly interrupted by the heavy guitars, and more vocal dynamism by Davis. This song is pretty diverse in itself. It goes from heavy, to popish, to anything and everything between. It is a very expressive song in many ways.

“This Loss” is a mournful and somber song. Davis steadily chants his lyrics in the beginning then breaks into a sorrowful, almost plaintive, “I am just a shadow of the man I once used to be”. It still has a vigorous musical aspect, but the words hit you on a visceral level. It feels like a song of losing oneself in your own grief. It is a beautifully tragic track. Two-and-a-half minutes in it slows into almost an angelic sound and Davis sings “Happiness is a club I’ll never get in” then immediately screams “Never get in”.

The last song, “Surrender to Failure”, is just as heartbreaking. It’s short, just over two minutes long, and has a steady beat where the vocals are front and center. Jonathan’s soul shines as he sings, “If only God will let me turn back time”. Once again, these lyrics are gutwrenching and distressing. He ends the song by sobbing “I failed”, a broken Davis, his transparency will be the glue that holds so many broken fans together.

This album will be a comfort to anyone who has lost someone they love, or have lost themselves. Davis has a way of comforting the broken while also being upfront and authentic about the process of humanity and all the despair that sometimes comes with it. It completes a metamorphosis of the new and the old in a elegant box tied up with a prodigious bow. Welch returning has completed this shift perfectly. While their original self-titled album will always be my favorite, I can easily say The Nothing is perhaps taking up at second place. It is genuine, aggressive, and showcases Korn‘s knack for hitting you in the gut and the feels at the same time.  It is not one to be missed.