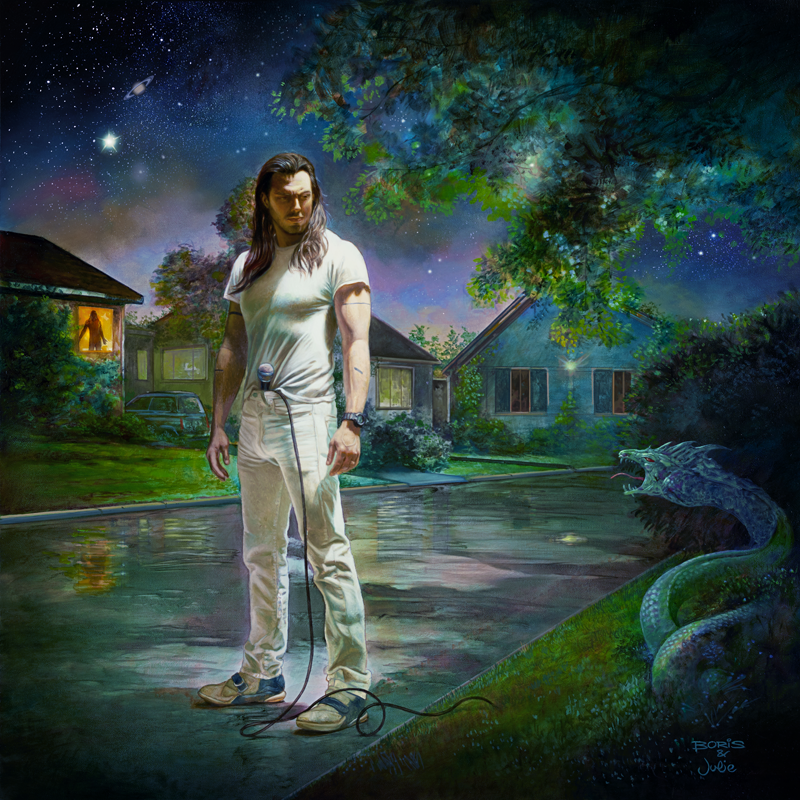 Regardless of where you stand in your opinion of Andrew W.K., he has always been somewhat of an enigma.  I’ve thoroughly read up on all the conspiracy theories, and parsed quotes concerning his legal matters (regarding the use of his “name”) for nuggets as to the authenticity of his identity, and the truth is that I’m still not entirely sure whether Andrew W.K. is an actual real guy who cranks out catchy, heavy, clinically efficient joy-anthems, or the world’s longest running viral marketing campaign.  I say all of this as someone who has seen him in the flesh at various points in his career and can verify with relative certainty that–if he indeed is the construct of some nefarious and mysterious entity—he has at least been portrayed by the same ultra-sincere dude since around 2001.

My first personal encounter with Andrew W.K. was outside of Denver’s Bluebird Theater on the I Get Wet tour back in 2002.  I’ve spent a good amount of time hanging around music venues so a meeting such as this isn’t unusual for me, but this one felt different and has always carried special meaning because it was on this night that everything Andrew W.K. stands for started to actually make sense to me.  A lot of people reading this are probably thinking “He’s just a big oaf who yells about partying, never changes clothes, and does a lot of fist pumps!”, and that’s pretty much what I thought up until I met him that night, but it wasn’t even my interaction with him which brought about enlightenment as to his nature—it was watching him interact with everyone else.

The show that night concluded—as many of his shows do—with nearly as many fans on stage as off.  In all my years of attending shows I’ve never seen anything quite like it.  The stage swallowed whole by a mass of joyous humanity.  And judging from the look on his face, I can’t imagine Andrew W.K. wanted it any other way.  Exiting the venue, I was surprised to see that he’d actually beat most of us outside and was already interacting with fans.  I watched for probably close to an hour as he took time to speak one-on-one with each person who waited that night, engaging in oftentimes deep and personal conversation while crafting unique and personalized autographs—many of which took him several minutes to complete.  Meeting a rock star or any other hero can be an intense thing, but Andrew W.K. is the sort of guy who channels that intensity back at his fans in such a way as to make them feel like he’s there to see them, and not the other way around.

Here’s the thing:  I haven’t yet said a word about Andrew W.K.’s new album, You’re Not Alone.  I haven’t deconstructed it, or over analyzed it, or taken it apart so I can put it back together again.  Honestly, I’m not sure I see much value in doing so.  Sure, the sonic indulgences that comprise the Andrew W.K. sound—the walls of sound that wash over you like relentless sheets of rain, the nimble piano flourishes, and the urgent “you got this, man” lyrics that sound like they are being sung by a whole chorus of triumphant Andrew W.K.’s—those things are all here, and they are all calibrated for maximum effect.  And it’s certainly no accident that You’re Not Alone is being billed as a “return” given that it has been 15 long years since Andrew W.K. released The Wolf as a follow-up to the legendary I Get Wet which was released just after 9/11.  And I don’t mean to discount his massive Japanese following, or the TV shows, podcasts, and general joy-spreading he’s done in the years since, but–for those of us who spent the early 2000’s basking in his joyous, thunderous glow–THIS is the moment we’ve been waiting for.  And for those of you who never saw benefit in his resonations—who only take him at face value—well, I don’t think You’re Not Alone is going to change your mind.  And that’s just fine so long as you understand what he means to the rest of us.

Late last year I happened upon a podcast called Missing Richard Simmons which was a multi-part series that explored the legendary fitness guru’s surprising pivot into seclusion after years of shamelessly prancing across TV screens in his signature tanktop & short-shorts.  My impression of Richard Simmons had been almost entirely formed by his many appearances on the Late Show with David Lettermen where he was the butt of a seemingly endless stream of buffoonery so, to me, he always seemed to be more garish persona than actual person.  But to his adoring fans, several of whom are featured on the podcast, he is viewed in an entirely different light.  To those people–most of whom struggled to find purpose in life behind crippling weight issues–he was a champion and a beacon of hope in a storm of never-ending struggle.  To those people his persona was entirely secondary to his message and it never mattered how he said what he said, because he always made it feel like he was saying it directly to them.

I guess what I’ve been trying to say is that Andrew W.K. is the Richard Simmons of hard rock.  And even though he never really went away, I’m sure as hell glad that he’s back–lord knows we’ve needed a reason to smile.

In Photos: ASKING ALEXANDRIA with CROWN THE EMPIRE