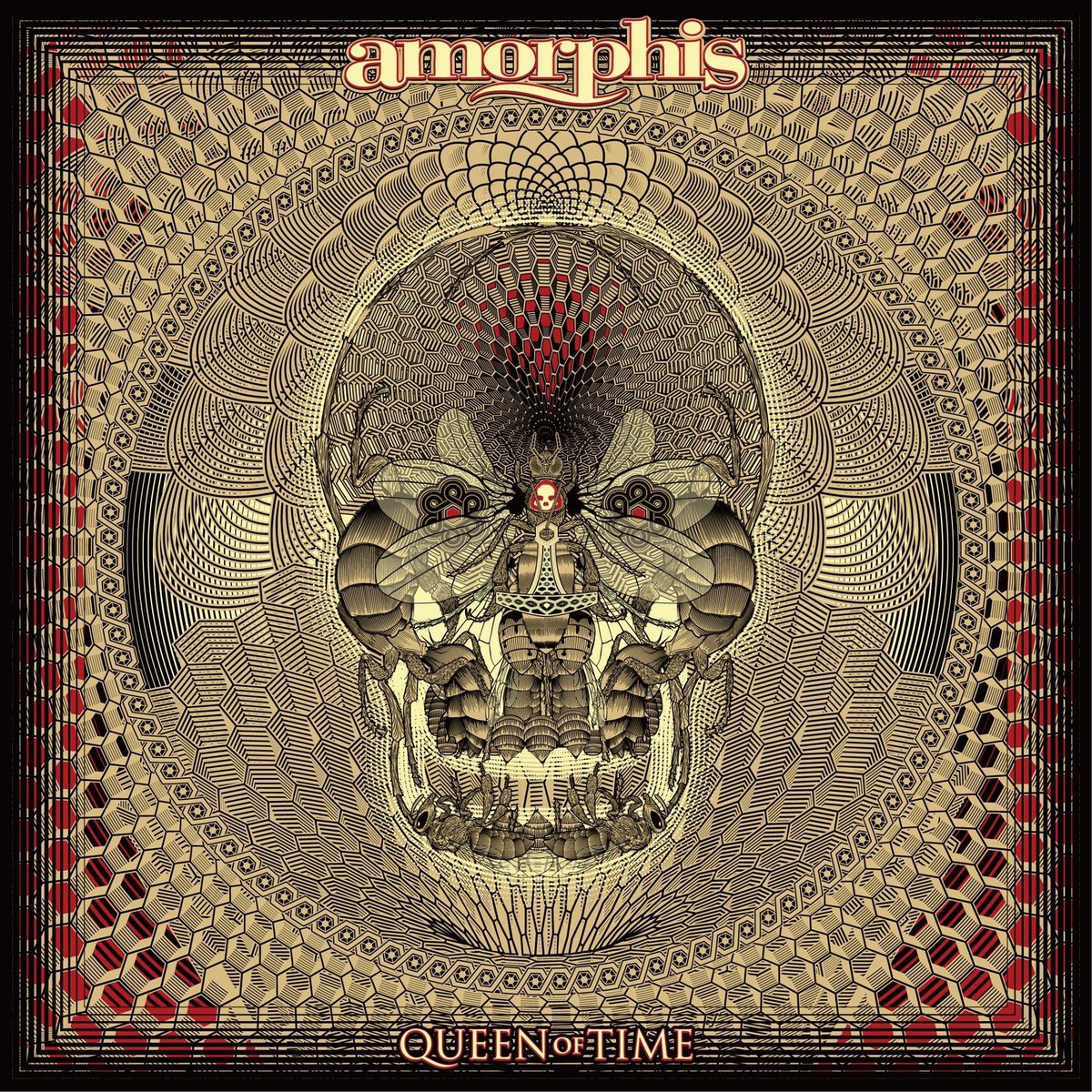 Amorphis released one of the genre’s greatest albums, Under the Red Cloud in 2015, and it is tough to follow a record of that calibre. When the Gods of Metal Nation  (editors in chief) said the new album is here for review, I screamed shotgun so hard, ripping my lungs. They, of course, did not hear my screams, but my neighbor did. He is a nice guy, so no problems there. Anyway, Queen of Time…

Queen of Time carries the traditional post 2000s sonic structure of Amorphis and a natural continuation from Under the Red Cloud. The album opens with “The Bee”, an atmospheric track that reflects the general attitude of the album. I cannot say it hit me like “Under the Red Cloud” did at as an opening track (which was a radio hit from the very first notes), but it is still a unique musical journey, and I enjoyed it. “Message in the Amber” follows the second track, with some seriously good guitar work laid the foundation. The track is not a memorable one, but not a bad one either. A massive part of the positives goes for the rhythm section for this one. It also showcases the signature folk basis of the Finnish band with the choir and the chorus lead guitars. “Daughter Hate” continues in similar vibe with small variations in rhythms and vocals. And then there is the original saxophone melody that pops in and out and makes you long for more. So far, it is hard to say the album is as memorable as “Under the Red Cloud,” but none of the tracks are “bad” or “mediocre.” Far from it. They are soundtrack-ish, moody even, and winking to new-school European progressive metal like Amorphis always did with their later works.

“The Golden Elk” is next, and it is arguably the first “radio hit” song. The Middle-Eastern strings and oud (I think) give a very different vibe to the signature Amorphis sound. “Wrong Direction” is the next one. It is another radio-friendly song with arpeggiators dominating the song’s structure. It is also one of the weaker tunes on the album. “Heart of the Giant” follows with a catchy main riff and the up-tempo beat. It is one of the best songs on the album. In general, vocals form a more prominent part of the sound in this album, and “Heart of the Giant” helps Tomi Joutsen to showcase his talents. The female choir parts, keyboard solos, intriguing instrumental passages make this tune a classic. “We Accursed” starts with the signature flute and guitar melodies of Amorphis. The flow of the song has problems with exciting slow-downs, but all in all, it is a good tune that everyone can enjoy. I especially liked the lead guitar through the bridge sections. “Grain of Sand” is another exciting song with that same Middle-Eastern vibe mixed with their Finnish-European sound. The song also has a killer guitar-keyboard solo mash-up. “Amongst Stars” is another typical Amorphis song, which diversifies with the guest appearance of Anneke van Giersbergen on vocals. It is another radio-friendly song, but I think it is one of the weaker songs on the album. “Pyres on the Coast” is the closing track of the album. A mid-tempo start with a northern folk drumming, continuing with a real groovy orchestra-supported up-tempo middle section and solos. A fine closure for the record.

I will not comment on the sound of the album. It is grand, majestic and bombastic as usual, and as expected from Jens Bogren. He is my favourite engineer nowadays. “The Bee” and “Heart of the Giant, “are the tracks to check, even if you are not into what Amorphis has to offer. Although almost all the songs are rock-solid, the album lacks the presence of hits like “Death of a King”, “The Four Wise Ones” or “Under the Red Cloud”.